Can the Navy’s New DDG(X) Destroyers Do It All? 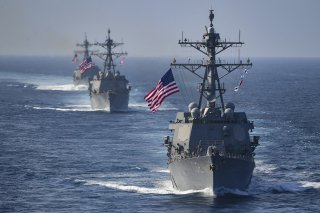 Ingalls Shipbuilding division, the company behind the United States Navy’s upcoming Next-Generation Guided-Missile Destroyers has been awarded a “cost-plus-incentive-fee contract for engineering and design from the U.S. Navy for the next-generation guided-missile destroyer (DDG(X)) program,” according to a statement from Huntington Ingalls Industries, the shipbuilder umbrella group.

“We are excited to continue on this path with our Navy and industry partners,” Ingalls Shipbuilding President Kari Wilkinson said in the Huntington Ingalls Industries statement. “It provides us a tremendous opportunity to bring best practices and innovation from our experienced engineering team to the design of this important future surface combatant.”

The statement further explained that “Ingalls Shipbuilding is a major contractor and shipbuilding partner in the Arleigh Burke-class (DDG 51) program that has been in production for three decades. Arleigh Burke-class destroyers are multi-mission ships that can provide offensive and defensive capabilities, and can conduct a variety of operations, from peacetime presence and crisis management to sea control and power projection, all in support of the United States military strategy.”

“The opportunity to work alongside HII and our industry partners to meet the Navy’s needs for capability, schedule and cost will result in synergies that build on other extremely successful Navy construction programs.”

The U.S. Navy’s Arleigh Burke-class destroyers, currently the backbone of the United States Navy and the Navy’s most prolific warship since World War II, has been steadily modified and upgraded as new technologies entered American naval service

However, that Cold War-era warship is rapidly approaching the limits of upgradability, necessitating a replacement.

In tandem with the Arleigh Burke-class eventual retirement, the Next-Generation Guided-Missile Destroyers will also replace the Ticonderoga-class guided missile destroyers, a warship class that excels in an air defense role but lacks some of the higher-end offensive capabilities of its Arleigh Burke-class counterpart.

The Next-Generation Guided-Missile Destroyers then will attempt to split the difference between the two ships by offering both a robust anti-aircraft and anti-missile defensive capability as well as a strong anti-surface ship ability.