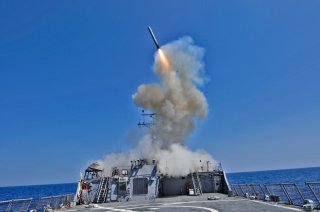 Russia is upgrading its Tomahawk-like ship and submarine-launched Kalibr cruise missile to enhance its performance for future warfare environments, a not-so-surprising development given the country’s large arsenal of cruise and ballistic missiles.

The Kalibr can be fired from the air, frommsurface ships, and from submarines out to ranges as far as 870 miles. The Kalibr’s manufacturer, Almaz-Antey, is reported to be working on an “improved” version of the missile with “better performance,” according to a report from Russia’s TASS news agency.

However, the TASS report offers little specifics regarding what kinds of enhancements might be being added to the Kalibr. Instead, it merely makes a vague reference to improved “combat efficiency.”

"Naturally, the work on improving the Kalibr missiles is ongoing and the Defense Ministry displays high interest in this type of weapons [sic]. We are planning to boost its performance characteristics and raise the efficiency of its combat employment. We are set to get a weapon that will considerably surpass the current generation," Almaz-Antey’s chief executive said in an interview with the National Defense magazine, according to TASS.

First used by the Russian military in Syria, the Kalibr cruise missile has been fired in combat thirteen times, TASS reports.

Questions abound about the Kalibr’s new upgrades. While the Kalibr’s 870-mile attack range places it in the same category as the U.S. Navy’s Tomahawk, it is not clear if the Kalibr’s enhancements can in any way match or parallel the latest U.S.-developed innovations now built into modern Tomahawks. For instance, the U.S. Navy’s Block IV Tomahawk cruise missiles utilize a two-way data link to share target details in flight and adjust course as needed. The GPS-guided Tomahawk is also capable of advanced mapping and navigation and operates with a “loitering” ability to hover near possible targets until it receives updated intelligence data and targeting details. Even more recently, the Navy has built a Tactical Tomahawk variant, which draws upon enhanced seeker and guidance technology to adjust its course in flight and hit moving targets. This technology could be extremely significant as it can enable the Tomahawk to strike moving enemy ships in maritime combat.

The real question with the upgraded Kalibr, therefore, seems to be centered around the extent to which it is being upgraded in a manner similar to the Tomahawk. Will it operate with a two-way data link to receive new target specifics in flight? Will it develop the seeker and targeting technology to track and destroy moving targets? The Russians have offered few details, yet it is reasonable to assume that the Kalibr will remain a threat to NATO for years to come.