Can Russia and America Avoid a New Nuclear Arms Race? 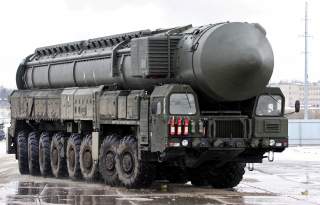 Delegations from the United States and Russia plan to meet in Geneva in mid-July 2019 to begin discussing a possible extension of the New START treaty, one of the major arms-control accords limiting the size and power and the U.S. and Russian nuclear arsenals.

But the treaty expires in 2021. And experts worry that the administration of U.S. president Donald Trump, in particular Trump’s national security advisor John Bolton, plans to sabotage a possible extension in order to allow for unlimited atomic rearmament.

“Before the Group of 20 summit last month in Japan, Russian president Vladimir Putin said he planned to push Pres. Donald Trump for an extension to New START,” The Associated Press reported. “Putin said his nation was ready to agree to an extension, but that Russia had not seen any initiative from the Americans even though the treaty expires in 2021.”

“Trump’s national security team has dithered for more than a year on beginning talks with Russia to extend [New START] before it expires in February 2021,” wrote Daryl Kimball, an expert with the Arms Control Association in the United States.”It is now apparent that Bolton is trying to steer Trump to discard New START.”

“There's no decision, but I think it's unlikely,” Bolton said of New START in a June 2019 interview.

“Without New START, there would be no legally binding, verifiable limits on the U.S. or Russian nuclear arsenals for the first time in nearly half a century,” Kimball pointed out.

The Trump administration’s cover story for possible sabotage of New START is that it wants a new, three-way nuclear-weapons pact. But negotiating a three-way treaty could take years and should not preclude an extension of New START.

A bill introduced by a bipartisan coalition led by House Foreign Affairs Committee Chairman Eliot Engel (D-N.Y.) and Rep. Mike McCaul (R-Texas), the committee’s ranking member, calls for extending New START as long as Russia remains in compliance, or until a new treaty that “provides equal or greater constraints” enters into force.

It would also require intelligence assessments of how New START’s expiration would affect the size and posture of Russian nuclear forces and of the additional intelligence capabilities that would be needed to compensate for losing the treaty’s extensive transparency and on-site monitoring provisions.

Meanwhile, Sens. Edward Markey (D-Mass.) and Elizabeth Warren (D-Mass.) have launched a bill to prohibit any funding for nuclear weapons that would violate New START limits as long as Russia continues to stay below treaty ceilings. Such an approach would guard against a breakout by either side and help to maintain strategic stability.

The stakes are enormous.  “If Trump continues to listen to Bolton’s advice and allows New START to expire,” Kimball explained, “he will likely become the first president since John Kennedy to fail to conclude at least one agreement with Russia to reduce nuclear dangers, and he will have opened the door to a new and dangerous nuclear arms race.”