Can Russia Help Biden Get a Comprehensive Agreement with Iran? 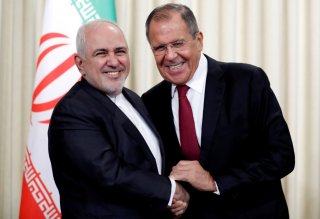 As Joe Biden embarks on his first weeks in office as U.S. president, an intensive debate is raging in Washington and global capitals on how to construct a Middle Eastern regional security process alongside the resumption of JCPOA, or Joint Comprehensive Plan of Action, related diplomacy vis-à-vis Iran. That debate is sustained by the frequently made assertion that it would be a mistake for Biden to return to the Iran nuclear deal, without correcting what some call its “original sins”—the deal’s failure to address Iran’s regional policies and missiles, alongside its “sunset provisions.” Experts and officials have called for a “nuclear agreement plus,” a “broader follow-on negotiation,” or a three-phased approach, to name but a few offers on today’s marketplace of Iran-related proposals. Pursuing such a broader effort will be a tall order for U.S. officials regardless of the precise format and sequencing; involving Iran’s formidable partner, Russia, in any diplomatic choreography, therefore, seems essential.

However, assuming that the Iran file could be a “low-hanging fruit” for cooperation in an otherwise strained U.S.-Russian relationship ignores Moscow’s ambivalent attitude toward Iran’s proxy activities and missile program—components of Tehran’s so-called “offensive defense” strategy. For the most part, Russia does not view Iran’s cultivation of proxy actors in Arab societies—from Lebanon via Iraq to Yemen—as a threat to its own interests. And where its views are more nuanced, as in Syria, Russia’s record of being able to rein in the Iranians is mixed at best.

For starters, Russia has consistently argued that Iranian activities in the region are unrelated to the nuclear file as a matter of principle. It has backed Tehran’s argument—especially amid the arms embargo dispute last fall—that raising issues originally considered “extraneous to the JCPOA by mutual agreement” is impermissible. That position has reflected a deeper concern in Moscow with the integrity of the P5+1 process, which affords the Russian government respect and status, but also its broader apprehensions with an alleged “rules-based international order,” in which the United States invents “rules” as it sees fit while flouting established international agreements like the JCPOA.

As a matter of practical policy, however, Russia’s view on Iran’s ties with the Iraqi Popular Mobilization Forces (PMF), the Yemeni Houthis, and the Lebanese Hezbollah is best described as a mixture of indifference and impotence. Though the recently sanctioned chairman of the PMF, Faleh al-Fayyad, has been an occasional visitor to Moscow, Russia can neither further nor contain Iran’s ambitions in Iraq—and it does not want to. Notwithstanding a desire among Russian diplomats to avoid perceptions of an exclusive alignment with a “Shia camp” in the region, given Moscow’s interests in good ties with Israel and the Arab states of the Persian Gulf, Russia lacks both appetite and leverage to meddle in Iraq’s domestic lay-of-the-land. In Yemen, claims over Moscow’s sway over the Houthis have been consistently overblown. Besides, Russia’s approach toward Yemen has been one of “strategic non-alignment,” aimed at preserving a balanced relationship with both Saudi Arabia and Iran. As such, while condemning the September 2019 Houthi attacks on Saudi oil facilities, Moscow has refused to blame Iran for its role in the war-torn country and has even blocked U.S. efforts to do so in the United Nations. And in Lebanon, Hezbollah’s entrenchment has such deep and robust roots, that it is hard to see how Moscow could tip the domestic balance of power even if it wanted to—and listening to Russia’s top diplomat serving in Beirut, one gets the impression that it doesn’t. More fundamentally, Russian interlocutors either reject the view that Iran’s proxies cause the havoc often ascribed to them from within the anti-JCPOA camp, or believe that such havoc is simply not Russia’s problem.

The only exception to Russia’s reluctance in reining in Iran’s influence might be Syria, where Tehran’s attempts to establish a network of allied local militias and import foreign proxies have been at odds with Moscow’s desire to form unified, Russia-oriented military and security structures. Russia has also worried that Iran might turn Syria into a base for targeting Israel. It should, therefore, come as no surprise that the frequent Israeli strikes against Iranian positions in Syria have elicited little to no official Russian reactions. That said, Moscow’s limited leverage over Tehran was put on display when the Russians failed to deliver on their 2018 promise to keep Iran-backed forces at least 60 kilometers away from the Syrian-Israeli border. Notwithstanding the competition for influence with Iran, Russian calculations in Syria are nuanced: a full Iranian withdrawal would unduly change the balance of power in favor of the United States and Turkey in that country and is therefore not in Moscow’s interest either.

As for the Iranian missile program, Moscow has consistently defended Tehran’s right to develop and test missiles, emphasizing that such activities do not violate international regulations and are intended to mitigate Iran’s sense of insecurity. That said, Russian officials have been hopeful that their military-technical cooperation with Iran, including on advanced air defense systems, may contribute to alleviating Iran’s perceived own vulnerability and prevent Tehran from taking escalatory steps that might exacerbate friction with the West. In 2015, for example, Russian Foreign Minister Sergey Lavrov justified supplying Iran with S-300 air defense systems with the need to “beef up Iran’s defense capabilities and stimulate negotiations” on the nuclear issue.

A broader reason for Russia’s ambivalent stance on Iran’s missiles and proxy activities is that the conflict potential they generate can play into Russia’s hands—as long as it does not precipitate full-blown war. So long as Iran’s regional policies are problematic for Western and regional countries, Russia benefits from being the chief intermediary between them and Tehran—as Foreign Minister Lavrov offered to his Saudi counterpart in Moscow just last week. Iran either finding too much common ground with its present foes or alternatively overstepping and inviting military escalation—neither option would be in Russia’s interest.

In light of the ambiguity emanating from Moscow regarding those regional issues Washington wishes to tackle in resuming its nuclear diplomacy with Iran, how should a Biden administration engage Moscow? One could argue that the United States, in unilaterally pursuing the “Abraham Accords,” intra-GCC reconciliation, Israeli-Lebanese maritime border talks, and its “maximum pressure” campaign against Iran, has recently proven that things can get done in the region without involving Russia. That said, the Iranians—in responding to Russia’s own Collective Security Concept for the Persian Gulf Area—have repeatedly insisted on Moscow’s involvement in any regional security effort, to ensure a “balance of power” among extra-regional actors involved.

Considering Tehran’s principled skepticism towards any diplomatic effort that extends beyond the nuclear—which will only further increase in case a more conservative government emerges from the upcoming Iranian elections—Washington should heed these demands. It is certainly better to have Russia in the process than to leave it out in the cold. Though Moscow’s stance on Iran’s regional activities might be ambivalent, Russian competition with Iran in Syria, as well as their military-defense cooperation, will afford Washington limited opportunities to rely on Russian leverage-plays with Tehran—particularly if other dimensions of the U.S.-Russia relationship will become less hostile. Still, Biden’s diplomats should go to Moscow with their eyes wide open to the constraints in getting it to act against Tehran.

Hanna Notte, PhD, is a Senior Non-Resident Scholar with the James Martin Center for Nonproliferation Studies (CNS). She is an expert on security and arms control issues related to Russia and the Middle East and was Senior Political Officer with The Shaikh Group, an NGO conducting Track II and informal diplomacy in the Middle East (2017-2020). On Twitter: @HannaNotte