Can Selling Weapons to Serbia Create Peace in the Balkans? 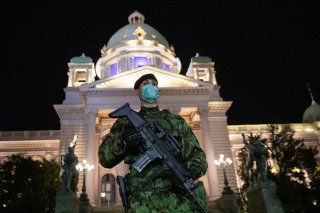 The Balkans, and the Western Balkans (i.e. the former Yugoslavia) in particular, are a major theater in Russia’s war with the West.  Serbia lies at the center of that theater and is an arena in which Moscow has made a major investment of economic, informational, military, and political resources.  As long as Serbia can be pulled away from adhesion to Western security institutions—despite its stated desire to join the EU—Russia can preserve the state of indeterminacy that it seeks in Europe. It can likewise prevent the realization of the abiding U.S.—if not European—objective since 1990: namely a Europe whole and free.  Western leaders understand this and have also sought to bring Serbia into a closer relationship with the West because they know that Serbia is a key to peace in the Balkans.

In pursuing its Balkan objectives Moscow utilizes all the instruments of power at its disposal, not the least of which are arms sales to Serbia. This is done in an attempt to prevent peace there and keep the Balkans in a state of unresolved tension.  For Moscow arms sales are a critical instrument of its foreign policy. They allow it to foster its military influence upon customers and generate multiple opportunities for corrupting military and governmental institutions.  Indeed, Deputy Prime Minister for Defense and the Space Industry Dmitri Rogozin stated in 2013 that, “The FSVTS (Russia’s arms sales organization) at the moment is, it can be said, the country’s second foreign policy agency, a second MID (Ministry of Foreign affairs), a second Smolensk square, because it strengthens what the diplomats do today, not just in political terms, but rather authenticated in metal, treaty relations, contracts, maintenance services, equipment repair, and its maintenance in a suitable state.”  When Russia sells arms, it is not simply searching for a consumer with a need, but is quite literally inserting weaponry and military technologies into a region to gain or increase its influence there. Rogozin also confirmed that this is Russia’s stance when he said, “They (the FSVTS) trade arms only with friends and partners.”

The ensuing unsettled conditions that stem from Russian arms sales and leverage upon Serbia work directly against American and European interests and if not mastered, could lead to more Balkan conflicts and crises in the future.  And, as European history tells us, Balkan crises tend to either trigger or reflect crises in the European state system.  Inasmuch as the post-Cold War settlement affirms the indivisibility of European security, Balkan crises challenge that notion to Russia’s exclusive benefit.  Therefore, arms sales to Serbia are a strategic issue whose ramifications go far beyond purely commercial considerations.

Serbia clearly wants to buy U.S. weapons. In 2020 it apparently sought twenty warplanes from Washington only to be turned down.  Not surprisingly, it then turned to Moscow and Beijing for weapons, as nobody else was offering what it wanted.  However, more recently there are signs that Serbia is looking westward to the U.S. and its allies, e.g. Israel.  In particular, Serbia has expanded relations with and is now buying weapons from Israel.  It is unlikely that this is happening without Washington’s knowledge or acceptance.  But it is arguably time to realize that it is arguably in America’s interest to do so as well.

There are many reasons to sell Serbia weapons.  First, if the United States, NATO, and the EU want to bring about peace between Serbia and Kosovo and build on what has been achieved by previous administrations they need, not only to be engaged with Serbia, but also to reduce Russia’s ability to frustrate Western policies by employing its leverage on Serbia.  It is clear from an examination of global arms sales that where Western countries refuse to sell weapons, Russia, and/or China, or other states replace them. Therefore governments have options beyond Washington and are not shy about using them.  Serbia is no exception to this rule and the considerable Russian influence there exacerbates the problem.  Therefore, to realize the opportunities in pacifying the Balkans the United States needs to be present and engage the Serbian government and military seriously.

Second, it also is the case that the Serbian military already cooperates more with NATO than it does with Russia, although Russian information warfare has persuaded the public of the exact opposite of this fact. Public opinion surveys and actual Serbian policies also show a greater willingness to cooperate with NATO despite some opposition to membership there. In that context, arms sales to Serbia would represent a sign of Western support that would intensify that trend and strengthen pro-Western tendencies in the Serbian government.

Third, engaging Serbia through arms sales could galvanize Belgrade to clean up its defense-industrial sector, which has been revealed to be thoroughly corrupt. Defense Minister Nebojša Stefanović and his family are evidently involved in a kickback scheme and Serbian weapons are going to terrorist groups.  Corruption offers Russia and China numerous opportunities to gain leverage over key governmental actors and sectors. One way to reorient the Serbian defense establishment is through arms sales.  This, after all, is what Moscow always strives for. And in this case, it would help cleanse the Ministry of Defense of corrupt pro-Russian officials or officials who can be blackmailed by Russia or China, as well as strengthen the hand of pro-Western elements who would welcome stronger ties with Washington and the West.

More generally and fourth, U.S. arms sales and support for allied sales to Serbia will also send a telling signal to Moscow and Europe in general that resolving the legacy of earlier conflicts of the 1990s holds an important place on the U.S. agenda.  That signal, particularly if coordinated with the EU and NATO, will invigorate the efforts to bring not only peace, but overall integration with the West in that region. It would likewise signify enhanced Western attention to and presence in the Western Balkans as well as a more meaningful investment in peace, security, prosperity, and improved governance.  Such signals not only strengthen the pro-Western forces in the Balkans at the expense of Russia and to a lesser degree China. They also improve actual conditions for people in the area.  In turn, that outcome will then be reflected in stronger public appreciation and support for the EU.

To be sure, many will object to selling weapons to Serbia without tying defense cooperation to improved Serbian governance and rule of law.  This challenge habitually engages a considerable amount of elite and/or public controversy in the United States. While this is indisputably a troubling issue, the fact remains that if the United States refuses to enhance its leverage and Serbia continues to modernize its military, others will not only happily sell Serbia weapons; they will, as does Moscow, use that occasion to strengthen precisely those factions that Western powers find most objectionable.  However, to the extent that Washington boosts its standing with Belgrade through expanded defense cooperation, it can then exercise its influence to affect Serbian internal dynamics, including exchanging arms sales for reforms as is now happening with Egypt.

If the United States did not possess genuine influence and leverage upon Egypt, it is unlikely that the Biden Administration could use security assistance as a mechanism for demanding reforms in Egyptian policy.  The same principle holds true for Serbia.  Only to the degree that the West is seen in Serbia as both a reliable ally and provider of real benefits will the United States have leverage there. Otherwise, as past experience shows, Belgrade will defy U.S. rebukes and sanctions on Russia and opt for Russian arms.  Unfortunately, the West does not possess exclusive leverage on other countries around the world, nor can it simply renounce its interests over the state of governance and of the rule of law in these countries.  Like it or not, no state does that; and states, as Charles De Gaulle reminds us, are cold monsters who pursue state interests unsentimentally.  Reason of state generally vanquishes values with ease, especially if the target of a state’s moralism has other options, as does Serbia. Those other actors are all too ready to take advantage of a moralism that has no practical consequences.  It is as true for Serbia as it is for other states who want better ties with Washington, that they often can afford to disregard the United States’ values but not their own interests in weapons, as has happened with Turkey’s purchase of Russian S-400 air defense missiles.  And, as the Turkish case suggests, suspension of weapons sales or technology transfer in the absence of effective leverage leads nowhere.  Ultimately if the United States is to be able to persuade Serbia to institute enduring governance reforms, it needs to be present on the ground there.  Otherwise, its admonitions and pressure will be dismissed and it will then realize neither its interests nor its values.

Refusing to sell Serbia arms will be rightly taken as a sign of the United States' overall disinterest or devaluation of the Balkans in general and Serbia in particular.  It will certainly disappoint pro-Western elements in Serbia and invigorate Moscow and Beijing’s supporters there.  Neither will it bring peace to Serbia and Kosovo or the larger region because it is precisely those elements who will have been strengthened by that decision who are the staunchest opponents of peace.  Those repercussions will also affect not only American arms dealers but the chances of European security in general and the EU’s standing in the Balkans.  Refraining from engaging Serbia either directly or through third parties acting with visible U.S. support will also do nothing to further the cause of democratization.  It will also show that the United States has failed to learn from the fiasco of its relations with Turkey how to find ways to reconcile American interests with those of governments like Serbia who are anxious to enhance their security by cooperating with the United States.