Can Turkish-American Relations be Salvaged? 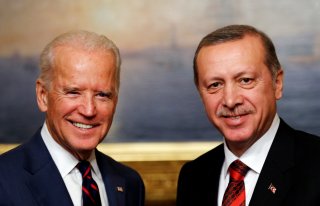 As the historic NATO summit is days away, many wonder if the meeting between Turkish president Recep Tayyip Erdogan and U.S. president Joe Biden is going to yield anything positive regarding the bilateral relations that have already hit rock bottom. The answer to this question lies in the fact that Ankara and Washington get along much better within the NATO framework than outside of it. Turkey, being the second-largest NATO member, has been a staunch supporter of the Transatlantic alliance.

The Turkish military has provided vital support to the NATO-led Kosovo Force (KFOR). The then-KFOR commander of the Camp Bondsteel, Col. Nick Duchic stated, “The Turkish Company is an integral part of our commitment to a safe and secure environment in Kosovo.” More importantly, in the immediate aftermath of the September 11, 2001, attacks on the United States, Turkey became the first Muslim country to send troops to the International Security Assistance Force (ISAF), the NATO-led military mission in Afghanistan. The Turkish mission helped NATO to secure the capital Kabul and provide training to the local Afghan forces. The former provincial governor of Kabul, Dr. Zabibullah Mojadiddi said, “Contrary to other international forces here (Afghanistan), Turks do not march through our streets carrying guns with their hands on the trigger. The Afghan people consider the Turkish soldiers as their own, not as a foreign entity.” In June 2021, Turkey offered to guard and run the Kabul Airport, which is vital for future diplomatic missions in the country in the aftermath of the U.S. withdrawal.

Recently, Turkey took over command of NATO’s Very High Readiness Joint Task Force (VJTF), in which around 7,000 troops are serving from Albania, Hungary, Italy, Latvia, Montenegro, Poland, Romania, Slovakia, Spain, the United Kingdom, and the United States. NATO heads of state and government decided to create the VJTF at the Wales Summit in 2014 in response to a changed security environment, including Russia’s destabilization of Ukraine and turmoil in the Middle East. More and more NATO members, particularly those in Eastern Europe, are now buying combat-proven Turkish armed drones to deter possible Russian aggression. Turkey has also repeatedly supported Ukraine and Georgia’s NATO membership, risking its delicate relationship with Moscow.

Praising Turkey as an “indispensable ally,” NATO chief Jens Stoltenberg said that “Turkish infrastructure and airports have been extremely important in fighting ISIS or Daesh.” General John Allen, the former commander of U.S. Central Command (CENTCOM), understands that “Turkey played an important role in the Global Coalition to Defeat ISIS and we continue to work closely with the NATO Ally, Turkey, in stabilizing our southern neighborhood.”

However, all hell breaks loose between Ankara and Washington outside of the NATO realm, particularly across Turkey’s southern borders. Simply put, the United States’ perceived interests and corresponding actions in the Middle East, especially in Iraq and Syria, are perceived by Turkey as grave security concerns. The more the United States attempts to coerce Turkey into accepting them as legitimate, the more Turkey resists, creating a tug of war and a downward spiral in bilateral relations. This pattern of behavior began to notably manifest itself in the aftermath of the Gulf War of 1991. The no-fly zone in northern Iraq (1991-2003) imposed and implemented by the U.S. mandate created a safe haven for the Kurdistan Workers’ Party (PKK)—Turkey’s arch-enemy and a recognized terrorist organization by both states). The PKK’s exponential growth in northern Iraq in the 1990s allowed it to launch cross-border attacks into Turkey, resulting in casualties on a weekly basis. The Gulf War not only exacerbated Turkey’s security concerns, but it also wreaked havoc on the Turkish economy as Iraq, Turkey’s neighbor and an important trading partner, became a failed state which was plunged into anarchy.

Although Turkey rushed to help the United States in Afghanistan after September 11 as part of its NATO member responsibility, the bitter lessons learned by the Turks triggered a defensive reaction in March 2003, when Ankara rejected Washington’s request to use Turkish soil to open a northern front into Iraq to topple Saddam Hussein. This infuriated the Bush administration, which blamed the success of the Sunni insurgency and the subsequent American losses squarely on Turkey’s refusal to cooperate. That was perhaps the major breaking point in bilateral relations where the Pentagon, particularly CENTCOM, permanently made up its mind about Turkey; the Department of Defense began seeing Turkey as an unreliable ally.

The civil war in Syria further pushed Turkish-American relations to a new low. CENTCOM’s overt material support for the People’s Protection Units (YPG), the PKK’s Syrian branch, has become an existential threat that Ankara will not accept. Having grown more independent in its foreign policy, particularly under President Erdogan and in light of declining American hegemony, Turkey defied the United States by staging multiple military incursions into Syria, effectively crippling the YPG’s military survival. Furious, the U.S. Congress did what it historically has done to Turkey: refusing to approve the sale of U.S. weaponry, in this case, the Patriot missile systems. The need to counter American support for the YPG and the need for a high-altitude missile defense system prompted Ankara’s rapprochement with Moscow, which wholeheartedly provided all the means necessary to pull Turkey into its orbit. Thus, the S-400 saga began!

All this considered, U.S. actions and Turkish reciprocity outside the NATO realm appear to be impacting the Transatlantic alliance adversely. The recent Ukrainian crisis once again proved that Turkey with its potent military and unique geostrategic location is and will be indispensable for Eurasian politics. The possession of S-400s by Turkey and the unconditional support for the YPG appear to be the most pressing issues for both countries at the moment. So, with China threatening U.S. global hegemony, and Russia gradually clamping down on the European Union, the Biden administration will have to make a choice: Is it more important to insist on trying to sustain the stillborn YPG autonomy project in Syria or to stop alienating the second-largest member of NATO? The answer to this question will determine whether Turkey will keep or drop the S-400s, thus determining the future of their relationship.