Can the U.S. Army Build a Lightweight Abrams Tank? 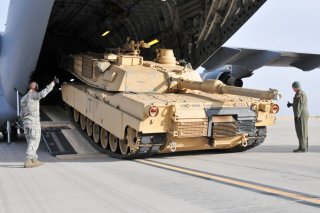 Will heavy armor still exist by 2040, or be supplanted by faster, more expeditionary lightweight alternatives?  Could future alternatives offer Abrams tank-like protection at a fraction of the weight? Some of this remains unknown but it is a challenge that teams of scientists at the Army Research Laboratory (ARL) in Aberdeen Proving Grounds, Maryland are working to address by conducting the basic research necessary to prepare for warfare in the 2040s, 2050s, and beyond.

Technological developments of this kind are of great consequence to the U.S. Army which now appears to be following an integrated two-fold path toward its development of future armored vehicles. In one respect, the service seems to recognize that there may not yet be a substitute for heavy armor in major mechanized combat. Lightweight composites may not be operational yet to the degree that new and lightweight materials could equal the protective power of heavy armor. However, technological breakthroughs may not be far away and it seems clear much progress has been made already. As part of this, it is also quite clear that the U.S. Army is committed to a lighter, faster, and more expeditionary armored vehicle that can move quickly alongside advancing units, cross bridges, and deploy from C-17s or C-130s. New armor compositions discovered by ARL scientists are likely already woven into new vehicles and informing future prototyping.

While some of the specific near-term material compositions might not be publicly available for security reasons, U.S. Army weapons developers regularly describe how promising composite materials are being woven into armor enhancements for both existing and emerging vehicles.

The maker of the Abrams tank, for example, is closely aligned with U.S. Army strategy as it is both heavily invested in upgrading, improving, and sustaining its tank platform while simultaneously embarking upon internal research to “innovate,” “identify new materials',' and support the U.S. Army’s two-pronged mission. General Dynamics Land Systems (GDLS) is conducting and supporting a range of innovative research aimed at addressing and even anticipating force requirements. For instance, GDLS is working to identify higher-performing materials capable of offering protection and survivability at a fraction of the weight of an Abrams tank.

Heavy armor or platforms like an Abrams tank will continue to exist even if lightweight alternatives are created. The Abrams is an example of how ongoing innovation has continued to upgrade and change the platform to improve protection, computing, lethality, and combat performance. It seems conceivable that there will be a place for upgraded Abrams tanks decades into the future to support and fight alongside lightweight armored vehicles and unmanned systems. The now emerging M1A2 SEP v4 Abrams tank variant, for example, includes paradigm-changing, third-generation Forward Looking Infrared (FLIR) sensors, advanced multi-purpose ammunition, new armor materials, onboard electricity, and an entirely new generation of artificial intelligence-enabled computing, electronics, and command and control technologies. While timeless as a concept, the Abrams tank of 2022 is an entirely different platform when compared to those which emerged in the 1980s.

The U.S. Army’s Optionally Manned Tank, for example, is still very much in its conceptual phase. Weapons developers are now working on various concepts and service leaders plan to solidify a general approach by next year. Ultimately, the direction chosen for this future combat vehicle will be informed, if not determined, by the measure of progress demonstrated in the research breakthroughs into lightweight armor materials. Can something at a fraction of the weight of heavy armor provide comparable protection to heavy armor, and enable an extremely survivable vehicle to maintain the speeds of a tactical vehicle, deploy and maneuver quickly, enter narrow spaces, and cross bridges not available to heavy tanks? This concept defines the U.S. Army’s current modernization posture which seems geared toward both maintaining and upgrading heavily armored vehicles, such as the Abrams tank, while simultaneously breaking new ground with composite materials and the construction of extremely survivable and deployable lightweight vehicles.