Canada and U.S. Agreed to “Temporarily Restrict All Nonessential Travel” Along Massive Border 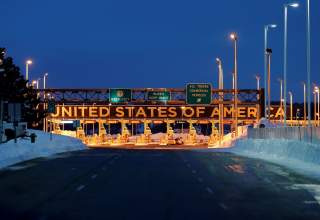 Through a mutual decision, Canada and the United States have agreed to “temporarily restrict all nonessential travel” along their 5,525-mile-long border. This is the latest joint international attempt to stop the spread of the coronavirus, which has caused a global pandemic. There are currently over 7,000 cases of the disease in the United States, with over 650 positive diagnoses in Canada.

“Travelers will no longer be permitted to cross the border for recreation and tourism. In both our countries we’re encouraging people to stay home. We’re telling our citizens not to visit their neighbors if they don’t absolutely have to. This collaborative and reciprocal measure is an extension of that prudent approach,” said Canadian Prime Minister Justin Trudeau in a press conference this morning, periodically breaking up his English with French repetitions for those in Quebec.

“We will be, by mutual consent, temporarily closing our Northern Border with Canada to non-essential traffic. Trade will not be affected. Details to follow!” tweeted President Donald Trump this morning.

Both leaders made assurances to the public that supply chains would be in no way affected by the closure. Trucking and other essential trade will continue as normal.

This travel restriction is in line with the Trump administration’s recent measures to control the coronavirus outbreak, which includes travel bans on China and continental Europe. For Justin Trudeau, however, this is a break from past policy positions.

In 2017, when Trump instituted his executive ban on travel with seven Muslim nations, Trudeau absorbed the public spotlight by saying Canada would never take such an action. “To those fleeing persecution, terror & war, Canadians will welcome you, regardless of your faith. Diversity is our strength #WelcomeToCanada,” he tweeted.

But now, Trudeau will deny anyone who is not a citizen or permanent resident entry into Canada. Special exemptions are being carved out for airline crews, diplomats, close familial relations, and even U.S. citizens (likely those involved in the still open supply chain).

Furthermore, beginning tomorrow, all international flights in or out of Canada will cease except in four cities: Toronto, Montreal, Vancouver, and Calgary. This rule also has a series of exceptions to it. International flights are permitted if they are between Canada and the United States, Mexico, or specific French-heritage islands in the Caribbean. All Canadians arriving in-country will then enter a fourteen-day self-isolation period.

“As the virus continues its spread, we've decided to take increasingly aggressive steps to keep you and your family safe,” Trudeau said during the announcement.

The coronavirus pandemic has hit close to home for the Prime Minister. Justin Trudeau has been self-isolating himself with his family since his wife tested positive for the virus. So far, he has shown no symptoms. “You can run a G7 country from home,” a Canadian official told Reuters.