Canada Is Reeling From a Mass Shooting On Top Of Coronavirus 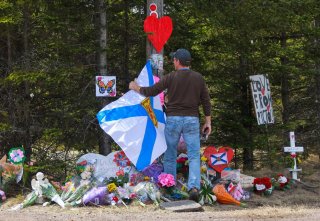 It’s been about a month since anything other than the COVID-19 pandemic has dominated the news. The mass shooting in Nova Scotia, with at least 23 dead, has now taken a grim prominence over COVID-19 in Canada.

The country’s worst mass shooting in history occurred in the midst of widespread shutdowns necessitated by the global pandemic. Shooting victims include two health-care workers, an elementary school teacher, a family of three and an RCMP officer.

Police first responded to a firearms complaint at 11:35 p.m. on Saturday night, April 18, in Portapique, N.S. We are still learning the details of the violent rampage being investigated at 16 crime scenes across locales in Portapique and nearby Colchester County.

It was not until 12 hours later, at 11:40 a.m. on Sunday, April 19, that the assailant was confronted and killed by police at a gas station in Enfield, just outside Halifax.

The perpetrator’s actions were especially perverse in two ways.

First, the ability of the attacker to move freely between crime scenes was aided by his impersonation of a police officer, complete with a vehicle modified to resemble an RCMP cruiser. Such situations are especially dangerous since they can lead to “blue on blue violence” where responding police officers are unsure whether the person approaching them is a friend or a foe. Second, the attacker appeared to have transitioned from targeting specific victims to more random killings.

The motives of the shooter are not yet clear, but the attack appears to have been premeditated.

According to studies by the U.S. Federal Bureau of Investigation, 77 per cent of mass shooters spend a week or more planning attacks, and they are often fuelled by multiple stresses and personal grievances.

Prior to the Nova Scotia incident, Canada’s worst mass shooting was the 1989 Montréal École Polytechnique massacre that left 14 women dead.

Other recent Canadian rampage killings include the April 2018 van attack in Toronto that killed 10 people, the July 2018 public mass shooting in Toronto’s Greektown, killing two and injuring 14, and the January 2017 hate-motivated gun attack on a Québec City mosque that left six people dead.

Read more: Toronto mass shooting: How the city is coping a month later

In North America, the worst mass shooting occurred in Las Vegas when a gunman took an elevated position from a hotel and fired down upon concert-goers attending the Route 91 Harvest Music Festival. In that October 2017 mass shooting, 58 were killed and more than 850 people were injured.

In a cruel twist of fate, a resident of Nova Scotia who survived the Las Vegas shooting was again traumatized by being exposed to scenes of tactical officers responding to a gun massacre, this time just 20 minutes away from where she lives in Masstown, N.S.

While the police did not consider the Nova Scotia mass shooting to be an act of terrorism, they said one area of investigation would be whether the pandemic played a role in the killing spree.

About a month before the rampage, a state of emergency was declared for the province due to COVID-19, and it was still in effect on April 18 at the time of the mass shooting. Under the COVID-19 state of emergency, police are tasked with enforcing orders under the Health Protection Act. Faced with the potentially overwhelming pressures of COVID-19, public safety resources were being stretched thin before the shooting.

The health-care consequences of gun violence during COVID-19 are substantial. In places like Chicago, with high rates of gun violence, the city’s interim police chief stated: “There are two pandemics in Chicago, and only one is virus-induced.”

In its list of ways the pandemic intersects with gun violence in the United States, Amnesty International suggests that victims of gun violence will require immediate and long-term emergency care, putting additional strain on hospitals struggling to cope with COVID-19 patients.

In rural Nova Scotia, the day after Canada’s worst mass shooting, the typical peaceful tranquillity of the community was shattered as residents awoke to sounds of helicopters circling the area, scores of RCMP vehicles and emergency response team armoured trucks.

In addition, as the grieving process begins, COVID-19 again makes a bad situation worse. People mourning mass shooting victims will need to do so in a way that does not create an environment for the community spread of COVID-19.

The threat is clear and present as illustrated in St. John’s, N.L., when a March funeral service was linked to more than half of the province’s known cases of COVID-19.

The Nova Scotia mass shooting was the first major disaster event to occur in Canada during the COVID-19 outbreak.

Not if but when

But it’s not a question of if but when other major disasters will occur.

Common springtime natural disasters of flooding, severe weather and wildfires are all possible right now. So are technological disasters like chemical leaks or blackouts. They present unique challenges to a population under stay-at-home orders, and they put more pressure on first responders and health-care systems that are already strained due to COVID-19.

The cumulative effects of the coronavirus combined with any other disasters will test the nation’s emergency response system in ways that it’s likely not prepared for. From the emergency management and public health perspective, we hope for no more major disasters.

Canada appears to be intent on taking some measures to curtail mass shooting, however. Following the Nova Scotia tragedy, Prime Minister Justin Trudeau reaffirmed his intention to ban assault weapons in a bid to avoid future mass shooting disasters.

This article by Jack L. Rozdilsky first appeared in The Conversation on April 4, 2020.