Canada Wanted A Lighter Rifle, But What It Made Was A Total Failure 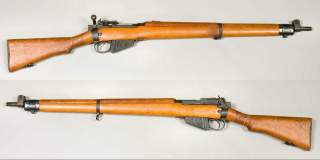 In 1943, Canada’s Long Branch Arsenal began developing a lightweight version of the Rifle №4 that, at six pounds and 10 ounces, was three pounds lighter than the standard №4.

The need for a lighter firearm was obvious in the late stages of World War II. But the Long Branch Lightweight Rifle, as Long Branch’s new weapon was known, couldn’t compete with the reliable carbines that ultimately met the demand.

Long Branch saved a significant amount of weight by lightening the Rifle №4’s receiver and stock. The 42.1-inch-long Lightweight was also two inches shorter than the standard №4 was.

The Canadian military believed it needed a lighter infantry rifle for the Pacific and Far Eastern theaters, where the high temperatures and humidity sapped troops’ strength.

Both RSAF Enfield in Great Britain and Lithgow in Australia began work on lightened versions of the Lee-Enfield. This work would eventually yield the British №5 Mk. I “Jungle Carbine.”

The Long Branch Lightweight Rifle featured a lighter barrel than the standard №4 plus a lower receiver wall and a weight-saving cut on the left side of the receiver behind the safety lever. It also had an aluminum alloy trigger guard that no longer carried the trigger assembly.

These changes sacrificed some strength in the receiver. Engineers at Long Branch also eliminated the Lee-Enfield’s butt stock socket and introduced a one-piece stock with a commercial recoil pad. The stock featured some cuts into the forearm and a painted aluminum nose cap

Long Branch borrowed several parts from the Rifle №4, including the bolt, rear sights and magazine. At least one source suggests Long Branch built 32 Lightweight rifles, while other sources suggest it built as many as 50. It’s possible that some of the trial rifles made their way to the Far East for field testing.

In any event, the British tested the rifle in a controlled setting and, on Dec. 29, 1943, reported that it handled well but suffered potential weakness in the one-piece stock. Accuracy was poor, as well, possibly the result of badly-bored barrels.

The British and Commonwealth militaries expressed little interest in the Lightweight Rifle and, near the end of the war, the British adopted the №5 Mk. I carbine, instead.