The Canadian Army Is Short on Machine Guns 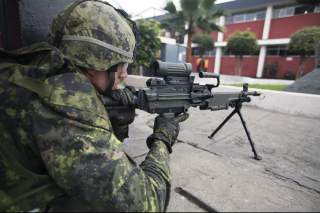 The Canadian army is suffering from a shortage of machine guns, according to Canadian media.

The machine gun furor erupted when the Ottawa Citizen reported that Canada was considering donating weapons to Ukraine, including C6 machine guns. This triggered “a number of angry emails from Canadian Forces personnel,” according to the newspaper. “They stated the weapons should be instead provided to the Canadian Forces since units are experiencing a shortage of C6s.”

The Canadian military responded that there isn't an actual shortage, but rather a temporary maintenance issue. “There is no C6 shortage in terms of meeting operational commitments, nor supporting key collective and individual training,” Department of National Defense spokesman Dan Le Bouthillier told Canadian media. “There is a fleet serviceability concern with the C6, that is being managed closely, but that does require reduced unit holdings in some instances in order to meet priority need.”

“At this time, we are managing the distribution of the C6 machine gun very carefully as these weapons undergo refurbishment,” Le Bouthillier added. “We have maximized the availability of these weapons in the field force and training establishments, while maintaining minimal depot stocks in storage to prepare for unforeseen short-notice requirements.” In 2017, the Canadian military awarded a $32 million contract to Colt Canada for 1,148 C6A1 FLEX machine guns.

Canada probably has enough machine guns, says Elinor Sloane, a former Canadian Forces officer and now a professor of international relations at Carleton University, Ottawa. However, aircraft and ships are a different matter.

Indeed, Ottawa is now grappling with how to replace its aging 1980s fleet of CF-18 fighters, the Canadian version of the F/A-18. Though an original partner in the Joint Strike Fighter program, Prime Minister Justin Trudeau's government canceled in 2015 a plan to buy sixty-five F-35s, and then in 2017 walked away from a deal to buy eighteen F/A-18 E/F Super Hornets. The latest plan is to buy twenty-five used F-18s from Australia as a stopgap while Canada conducts a competition to buy eighty-eight new fighters. Europe’s Typhoon and Sweden’s Gripen are among the contenders, as well as the F-35 and Super Hornet.

But trade disputes between Canada and the United States could throw the F-35 and Super Hornet out of the race. All of which is likely to inflame the Trump administration, who has accused the NATO countries of being “freeloaders” while America pays to maintain the strongest military in the alliance. While Trump has called for NATO members to spend 4 percent of their GDP on on defense, many have yet to fulfill previous pledges to spend 2 percent (Trump claims the United States spends 4.2 percent to GDP, though others say 3.5 percent is more accurate).

Canada's defense budget has been growing at a little over 1 percent of GDP, and scheduled to rise to 1.4 percent by 2024. Ironically, while Trudeau leads the Liberal Party, which traditionally has favored a military oriented toward peacekeeping, his government is reorienting toward a more muscular defense policy reminiscent of the Cold War.

“He [Trudeau] was told that the peacekeeping he thought existed no longer exists,” Sloane says. Now, Canada is buying armed drones, beefing up its special operations troops and delving into cyberwarfare. It is also devoting more effort toward defending Canadian interests in the Arctic—a region where multiple nations have claims, including Russia. The Canadian Navy is buying six new patrol ships designed to operate in Arctic waters.