A Cannon or a Gun? The Colt Anaconda Packs a Serious Punch 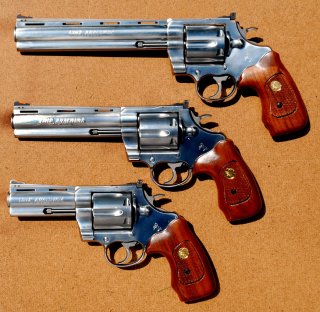 Colt is one of the most recognized firearms manufacturers in the United States and around the world. The company was one of the early revolver pioneers, building upon and improving designs that its founder, Samuel Colt, patented in the mid-1830s.

Colt has driven many advancements in firearm design since it was founded. Although it manufactures some of the most modern semi-automatic pistols and rifles, it does continue to market its revolvers, which are some of the best weapons money can buy.

One of Colt’s most powerful revolvers in the Colt lineup is the Colt Anaconda.

The Anaconda is available in two main variants, both of which are large revolvers. The smaller of the two has a long, six-inch barrel, and there is even a very long eight-inch variant also available.

Colt’s revolvers are aesthetically very recognizable, and the Anaconda is no exception. Much like other Colt revolvers, the Anaconda features a long, full-length ejection rod lug underneath the barrel, as well as ventilation ribs above the barrel. Showing a flash of modernity, the Anaconda ships with recoil absorbing synthetic Hogue grips.

Colt’s Anaconda is indeed a very high-quality revolver, though some have pointed out some faults with the design. One of the most common detractions regards the revolver’s high weight, which is exacerbated by the aforementioned under-barrel lug. Though the additional weight does help compensate for the prodigious recoil generated by firing the large .44 Magnum cartridge, it slows target acquisition and makes the revolver less maneuverable overall.

One of the other complaints about the Anaconda is its high price point. Both the six-inch and eight-inch variants retail for $1,500 on the Colt website, a price point that could turn off some potential buyers in favor of more affordable alternatives.