Is Capitalism Broken? Or Is Something Else To Blame For America's Economic Woes? 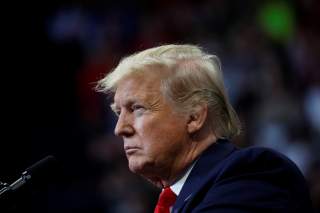 The recent downshift in US economic growth has led many critics of the 2017 Trump tax cuts to declare them a failure. In particular, skeptics have noted the lack of a sharp and sustained upturn in business investment. Higher business investment — eventually leading to higher productivity and wages — is supposed to be the key growth-forcing mechanism of the tax cuts.

But maybe it’s not the case that the tax cuts failed business, but rather that business has failed the tax cuts. At least that seems to be the theory of some politicians. As they see it, even big tax cuts have been unable to shake Corporate America from its longer-term indifference towards investment, whether in machines or workers. The diabolical forces of “shareholder primacy” and “short-termism” on public companies are just too powerful. American capitalists are failing American capitalism. Perhaps some new middle-way between market capitalism and democratic socialism is needed.

Or maybe not. For starters, good corporate behavior is often rewarded by investors. Fortune magazine annually compiles a list of the “best companies to work for” that takes into account worker and customer satisfaction. Those firms have handily beaten the broader stock market for nearly two decades. Moreover, a 2018 Federal Reserve study found “robust evidence that public firms invest significantly more than private firms,” despite concerns that public firms are under the thumb of short-term oriented shareholders. Then there’s the reality, as economist Larry Summers has pointed out, that in a world where profitless unicorns go public at high valuations, a pretty significant chunk of the market seems unaffected by any “systemic bias” toward short-termism created by shareholder capitalism.

Critics of “shareholder primacy” and “short-termism” might also be ignoring the evermore important role of intangible investment in the American economy, stuff like software, R&D, design, branding, training, and business-process engineering. Check out this exchange I had in a recent Q&A podcast with Stian Westlake, co-author with Jonathan Haskell of “Capitalism without Capital: The Rise of the Intangible Economy.” From our chat:

Pethokoukis: Is there something else going on with business investment that perhaps cutting the corporate tax rate won’t fix?

Westlake: We think there is. In this new world of intangibles, a lot of investments with aspects like synergies and spillovers are really worth making if you’re Google — if you’ve already got valuable intangibles and can take advantage of the scale. But if you’re a less-favored firm that can’t benefit from those, the winner-takes-all effect will in fact discourage you from making those kinds of investments.

Pethokoukis: Part of the issue, then, is that if you’re at a firm that’s already doing well with lots of smart people, you can take advantage of the latest advances in robotics and AI rather quickly. Other companies may eventually catch up, but it may take a while, or they may say, “We can go buy this stuff, but we’re never going to get a good return. We just don’t know how to use it well in our business.” So they won’t make those investments. And if those investments are becoming more important, then maybe we shouldn’t be surprised right now that we’re not seeing an explosion in business investment just because of a tax cut.

Westlake:  Right, we think this helps explain this effect of secular stagnation, where there’s a combination of what seems like a fantastic time for technology, a time where some companies seem to be posting incredible results for ROI in companies like Google, but the aggregate levels of investment are still low. We think that bifurcation helps explain that.

Pethokoukis: An alternate explanation has been that the problem is with corporate governance. That you have these CEOs under a lot of pressure from shareholders to generate good returns over the next quarter or two. Because of that short-term mentality from “shareholder capitalism,” these companies just aren’t investing. How much merit does that alternate explanation seem to have, if any?

Westlake:  So I spent a long time talking to CFOs and sell-side analysts about this question over the last 10 years, and one of the things I think comes across is that analysts are trying to work out which of those two categories a given company falls into. Are they in the category of companies that you can trust to make risky intangible investments because they can internalize the benefits and spillovers? Or are they in the “also-ran” category — the category that can’t benefit? And you see that if you’ve got a company that’s seen as a growth prospect, they often have remarkable leeway from corporate governance to make investments.

This is a constant argument between CFOs and analysts at companies like Google, or Tesla, more notoriously. But when you convince analysts that you’re in that category, a lot of these “short-termism” criticisms don’t apply, and you see companies making long-term investments. But in some sense, analysts are responding quite logically to this new economic reality.

Pethokoukis:  So if an analyst or investor thinks, “You’re the kind of company that hasn’t shown a great ability to incorporate acquisitions or new kinds of intangible investments in the past,” then they’re going to give you a short leash. “Perhaps you should be focusing more on cutting payroll, becoming more efficient, or other things.”

Westlake: Right, focusing on your core business and giving money back to shareholders.

Pethokoukis: “You can’t be trusted to do this.” So it’s almost like we’ve confused this. It’s not like corporate America isn’t investing. Certain parts are, especially these big tech companies.

James Pethokoukis is the editor of AEIdeas and the DeWitt Wallace Fellow at The American Enterprise Institute.