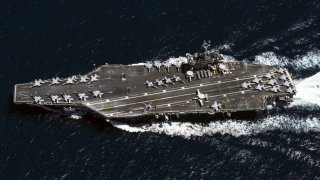 Yesterday, Captain Brett Cozier was relieved of his command of the USS Theodore Roosevelt, an aircraft carrier currently stationed in Guam. The ship, with a crew of 5,000 sailors, has suffered an outbreak of the coronavirus, with 140 people testing positive.

In a four-page memo obtained and published by the San Francisco Chronicle, Cozier recommended to his superiors that the Theodore Roosevelt be evacuated except for a skeleton crew. If his sailors remained on board, the captain said, it would be impossible to quarantine infected persons, and the virus would spread to the entire ship. “We are not at war. Sailors do not need to die. If we do not act now, we are failing to properly take care of our most trusted asset — our Sailors,” he wrote.

The memo was included in an email that was sent to between twenty and thirty people. While the Navy has not accused Cozier of personally leaking its contents, it is blaming him for using “poor judgement” in sending the information through an unsecured channel and copying numerous people on it, instead of following the chain of command and using official lines of communication.

Defenders of Cozier say he was acting out of concern for his sailors and acted drastically because he was being ignored by the high command. The Navy establishment contends that the coronavirus outbreak was already dealt with and claim that Cozier played no part in alerting the high command of the problem.

“I know that he loves this crew. I know that the crew loves and respects him. But that's not an excuse for exercising the judgment that he did," said Acting Secretary of the Navy Thomas Modly. "So, it was very, very difficult for me. I had wished that I would never have to make a decision like this."

“I needed a CO [commanding officer] there that could help manage us through this crisis, and I just didn't think—based on those actions—that [he] could do that,” Modley concluded.

As Captain Cozier disembarked from the ship, his crew gave him a round of applause, enthusiastically shouting his name. Cozier responded with a brisk salute.

His removal has engendered confusion and anger in Congress. “Throwing the commanding officer overboard without a thorough investigation is not going to solve the growing crisis aboard the USS Theodore Roosevelt,” said a joint leadership statement from the House Armed Services Committee. “What’s more, we are very concerned about the chilling effect this dismissal will have on commanders throughout the Department of Defense. Dismissing a commanding officer for speaking out on issues critical to the safety of those under their command discourages others from raising similar concerns.”