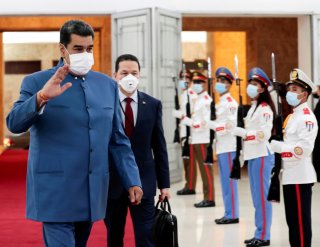 On July 5, the Caribbean Community (CARICOM), which comprises twelve Anglophone Caribbean states plus Haiti and Suriname, held its forty-third Heads of Government Meeting, the community’s principal political organ. The meeting’s agenda focused on the recurring energy and food crises faced by these small states due to the Russian invasion of Ukraine. Specifically on the energy front, a unified CARICOM collectively asked for help from authoritarian Venezuela through PetroCaribe, a geo-economic tool created in 2005 by the late President Hugo Chávez to buy CARICOM’s loyalty by financing participants’ oil imports and increasing intra-bloc trade and investment. In exchange, the highly democratic CARICOM ignored Venezuela’s descent into authoritarianism and shielded the regime from condemnation in multilateral organizations like the Organization of American States (OAS).

After the 2014 global oil price slump, chronic fiscal mismanagement, and U.S. sanctions, the ability of President Nicolás Maduro to buy CARICOM’s support virtually disappeared. However, given CARICOM’s current urgency for cheap oil and leveling off in Venezuela’s oil production, PetroCaribe is likely to return from the dead. The re-marriage of CARICOM and Venezuela will likely hurt democracy prospects in the South American nation and, critically, continue to show the United States’ hegemonic decline in the hemisphere.

Structurally, the Caribbean has historically suffered from the oil market’s volatility. Except for oil-rich Trinidad & Tobago, CARICOM states are net petroleum importers. When PetroCaribe was launched, all CARICOM members but Barbados and Trinidad & Tobago joined the oil program, which financed over 50 percent of oil imports from Venezuela if crude prices surpassed $80, as occurred from 2007-2014. Roosevelt Skerrit, Dominica’s prime minister, highlighted PetroCaribe’s importance, noting that it “is the lifeblood of many countries in the Caribbean.” These generous terms allowed participant states to save significant amounts of revenue, although they simultaneously increased their indebtedness and, correspondingly, dependence on Venezuela. Unsurprisingly, CARICOM states, among the most democratic and free in the world, sided with Venezuela as Chávez and Maduro established a full-scale autocracy.

The Russian invasion of Ukraine is putting immense pressure on Caribbean economies from the spike in energy prices. Gaston Browne, prime minister of Antigua & Barbuda, expressed concerns that high oil prices will force his country to increase domestic gas prices, while the Bahamas’ government alluded to the pressure on transportation costs for vitals, like food and fertilizers. Hard hit by the Covid-19 pandemic, CARICOM economies experienced an average economic decline of 13.8 percent, excluding Guyana’s oil-fueled economic growth. According to the UN’s Economic Commission for Latin America and the Caribbean (ECLAC), “lower expected growth will be accompanied by higher inflation and slow employment recovery.” In a desperate effort to revert this trend, CARICOM has rationally turned once again to Venezuela to obtain generous financing for oil imports. In return, CARICOM’s renowned stance offers the Maduro regime an opportunity to jump-start PetroCaribe as a tool to regain international legitimacy and heighten its demands for sanction relief.

Hence, it was unsurprising at the recent Heads of Government meeting when leaders collectively urged the United States “for the removal of the sanctions on Venezuela to allow for countries in the Region to benefit from the PetroCaribe initiative.” Never before had CARICOM members confronted Washington for the removal of sanctions to favor an authoritarian rival’s geo-economic tool like PetroCaribe. Support for the PetroCaribe route includes island nations (the Bahamas, Haiti, Jamaica, and St. Lucia) that previously sided with Washington in condemning Maduro’s autocracy. In a decisive tone, Prime Minister Ralph Gonsalves of St. Vincent & the Grenadines confirmed that, after meeting personally with Maduro, “the decision had been made for the resumption” of PetroCaribe.

In a nutshell, CARICOM’s economic difficulties and the ongoing energy crisis have pushed these countries closer to autocratic Venezuela’s sphere of influence. Such developments will have detrimental effects on Venezuela’s democratic efforts and U.S. leadership in the region.

When PetroCaribe waned, the United States structured its own geo-economic tool in 2014, the Caribbean Energy Security Initiative (CESI), to facilitate a “more diverse and sustainable energy matrix” in the Caribbean. CESI was able to lure the Bahamas, Haiti, Jamaica, and St. Lucia—previously PetroCaribe beneficiaries—into the U.S. camp. With their votes, multilateral pressure from the OAS finally arrived in 2017 to support democratization in Venezuela. In 2019, President Donald Trump met in Florida with the four CARICOM members “to thank these countries for their support for peace and democracy in Venezuela.” It became crystal clear that from 2017 onwards, the four islands allied with the United States “in response to reduced subsidies from PetroCaribe and new economic benefits from CESI.”

Now, PetroCaribe’s imminent return signifies that, if recent history offers any guidance, Caribbean democracies will go back to supporting Maduro’s autocracy or ignoring his regime’s human rights violations in exchange for preferential oil prices and investment. Hence, it is plausible to infer that multilateral pressure from the OAS will diminish or that ongoing democratizing efforts will be toned down for weak, ineffective declarations under the pretext of non-interventionism.

Moreover, CARICOM’s rapprochement with Maduro’s Venezuela offers further signs of U.S. hegemonic decline in the region. As CARICOM’s main trading partner and source of foreign investment, the United States has done very little to exploit such a position in return for geopolitical goals. While the United States has promoted $120 million through CESI in the Caribbean for marginal sustainable energy projects, Maduro has retained most of CARICOM’s support by following the geo-economic playbook: donating “petro-houses” in St. Kitts & Nevis, reducing energy insecurity through a revitalized PetroCaribe, and forgiving St. Vincent & the Grenadine’s full PetroCaribe debt, with similar pending arrangements for chronically indebted Antigua, Dominica, Grenada, and St. Kitts, amounting to $370 million in just debt relief.

The United States certainly has the resources and capability to play a similar geo-economic card and influence the fourteen sovereign states whose combined GDP resembles Hawaii’s; it just lacks the resolve to do so. The Caribbean’s recent criticism of the Biden administration’s exclusion of autocratic regimes in the 2022 Summit of the Americas exemplifies not only the waning influence of U.S. hegemony right in its backyard but also the Caribbean’s frustration and discomfort with the U.S.-backed order in the region. Assessed by its use of economic instruments to promote its interests and produce beneficial geopolitical goals, the United States possesses a poor record in the Caribbean, as the Venezuelan case illustrates.

CARICOM democracies have ignored Maduro’s autocratic actions because it produces incredible material benefits for them. In regaining a credible hegemonic status, the United States should reformulate its policies accordingly with the CARICOM states’ behavior, realizing that it likely requires employing a PetroCaribe-like strategy. The United States holds initial leverage from its large amounts of trade and investment in the Caribbean, which must be ultimately translated into support for U.S. strategic interests in tandem with more tangible benefits for CARICOM.

In return for CARICOM’s diplomatic support of U.S. democratizing efforts in the relatively democratic Western Hemisphere, the United States should use its economic statecraft to reform CESI’s green energy purpose and include debt relief programs, financial aid for debt reduction, increased investment in tourism and services, and, critically, help recipients meet their immediate energy demands. Such an arrangement will tremendously benefit the Caribbean—a region with the highest debt-to-GDP in the world and known for its energy insecurity. Continuously failing to understand the realpolitik and rational logic underpinning these small states’ foreign policies will only exacerbate the tragic fading of U.S. influence not only in the Caribbean but in the wider Americas.

Leonardo Di Bonaventura-Altuve is a business and policy consultant at Sendero Consulting and an incoming graduate student at Oxford University. He has previously held positions at the Organization of American States (OAS) and Center for Strategic & International Studies (CSIS) and graduated with highest honors from the University of Texas at Austin in International Relations, being prized the George H. Mitchell Award for the Best Social Science Thesis.