Carter Page is Suing the DNC For the Steele Dossier 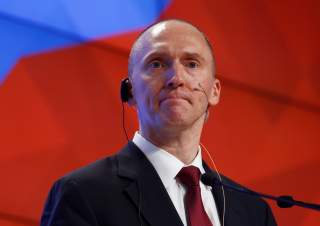 Former Trump campaign adviser Carter Page filed a lawsuit Thursday against the Democratic National Committee and the law firm that commissioned the infamous Steele dossier, and his lawyer suggests there is more litigation to come.

In the lawsuit, Page accuses the DNC and its law firm, Perkins Coie, of disseminating “falsehoods” in the dossier through the media, leading to death threats and a loss of income for the former Trump aide.

“The Defendants are private actors who used false information, misrepresentations and other misconduct to direct the power of the international intelligence apparatus and the media industry against a private individual, Plaintiff Carter Page, to further their political agenda,” Page’s lawyers said in the 23-page lawsuit, filed in federal court in Chicago.

Page has sued the DNC and media outlets that published information in the dossier before, but those complaints were tossed out of court. The latest lawsuit is the first Page has filed through a legal team.

He is represented by the firms Pierce Bainbridge Beck Price & Hecht and Rathje Woodward, out of Chicago.

The suit is also Page’s first since the release of a Justice Department inspector general’s (IG) report which undermined the credibility of the dossier, which the FBI cited extensively in applications for Foreign Intelligence Surveillance Act (FISA) orders against Page.

John Pierce, one of Page’s lawyers, suggested that more lawsuits are in the cards based on the IG’s findings.

“This is a first step to ensure that the full extent of the FISA abuse that has occurred during the last few years is exposed and remedied,” Pierce told Fox News.

“This is only the first salvo.”

Fusion GPS and Steele worked closely to collect information about Trump and campaign aides like Page, and also to disseminate portions of the dossier to journalists. At least two journalists who met with Steele and Fusion GPS — Michael Isikoff and David Corn — published stories before the election based on information from the dossier.

Isikoff published an article at Yahoo! News on Sept. 23, 2016, that detailed Steele’s allegations about Page.

Steele alleged in the 35-page dossier that Page was a part of a “well-developed conspiracy of cooperation” between the campaign and Kremlin to influence the 2016 election. Steele also accused Page, a former Naval officer, of meeting secretly in Moscow in July 2016 with two Kremlin operatives.

Page has vehemently denied the allegations ever since BuzzFeed News published the dossier Jan. 10, 2017. The special counsel’s report and the IG report supported his denials. The special counsel found no evidence that any Trump campaign advisers conspired with Russia.

The IG report cast even further doubt on Steele’s work. The report also criticized the FBI for relying heavily on Steele’s information in applications for warrants to wiretap Page.

The IG found that FBI agents failed to disclose exculpatory information regarding Page in its four FISA applications against him. The FBI also failed to tell the FISA Court that Steele’s main dossier sources disputed much of what was in the document.

The IG’s findings evoked a rare rebuke from the FISA Court. Judge Rosemary Collyer, who presided over the court until December 2019, released an order blasting the FBI for submitting “false” and “misleading” information about Page. She ordered the FBI to submit a proposal to address the problems laid out in the IG report.

The Justice Department has also conceded that two of the four FISA applications were invalid.