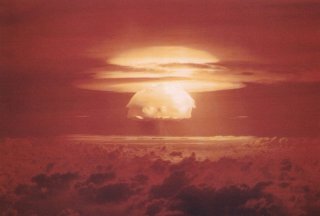 For nuclear scientists, 1950s America was a dizzyingly exciting time to be alive. The Department of Defense and Atomic Energy Commission conducted tests almost every year of that decade, sometimes conducting multiple groups of tests. Perhaps some of the most infamous of these—and deadliest—were the Operation Castle tests.

The Operation Castle group of tests sought to validate dropping new, high-yield thermonuclear weapons from the air. However, the technology involved in making the bombs was complex and unproven, so the Atomic Energy Commission chose several kinds of nuclear devices of varying design and yield strength, one of which was the Castle Bravo test.

During the planning phase of the test and the nuclear device’s manufacture and assembly, there had been speculation that Castle Bravo could, in fact, go big. However, estimates of the increase in explosive potential placed extra explosive yield at twenty percent. This would prove to be a wild underestimate.

The bomb’s yield was three times greater than expected and roughly 1,000 times more powerful than either of the bombs dropped on Japan during the Second World War.

The BBC’s report in the explosion’s immediate aftermath is chilling. “The 15 megaton bomb delivered a force far more powerful than expected. One of the atolls has been totally vaporised, disappearing into a gigantic mushroom cloud that spread at least 100 miles wide and dropping back to the sea in the form of radioactive fallout… It destroyed one island and left a crater 175 feet deep.”

Video reel of the explosion shot from the air is apocalyptic.

Given the device’s more significant than expected explosive force, the danger zone the United States declared before the test was no longer adequate. Shifting winds also brought fallout from the explosion—mostly pulverized coral, sand, and dust mixed with radioactive elements—over inhabited islands to the explosion’s east.

Around two days after the test, the Department of Defense evacuated the islanders affected by the Castle Bravo test. Three years later, the Atomic Energy Commission allowed the islanders to return. Still, their homecoming was short-lived: much of the food the islanders traditionally relied on—fish, various plants, and coconuts, either no longer existed on their islands or made them sick. So they evacuated once more and still suffer from significantly elevated cancer rates.

A Japanese tuna fishing boat, the Daigo Fukuryū Maru, was fishing within the area affected by nuclear fallow. As a result, its twenty-three-man crew became covered with nuclear fallout and suffered from acute radiation syndrome. The crew’s radiation exposure soon caused them nausea, dizziness, headaches, and diarrhea. Several days later, the men developed blisters where their skin contacted fallout; their faces darkened; their hair fell out.

Though several crewmen lived for many decades afterward, many died in their 50s or 60s of various cancers attributed to their radiation exposure.