Catching Coronavirus Is Awful (But Ebola Has a 50% Mortality Rate) 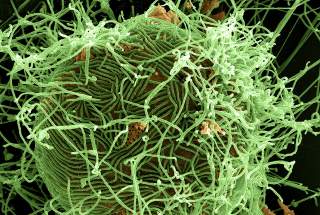 Generally speaking, the spread of contagious diseases, and (in modern times) the efforts to combat and contain them, is determined the actions tens of thousands of people.

Yet even when discussing such mass phenomena, there are arguably inflection points where a few individuals may have had a tremendous impact. That arguably may be particularly true of the 2014 Ebola epidemic that broke out in Western Africa—for which the World Health Organization believes it has pinpointed the point of origin.

Bats in the Backyard

First identified in Sudan in 1976, Ebola has captivated the attention of the Western world since its grotesque effects were described in the 1994 book The Hot Zone by Richard Preston. The disease, which is transmissible by animals, infamously can escalate from initial fever and flu-like symptoms to vomiting, and gruesome internal and external hemorrhaging, causing the afflicted to bleed both internally and externally and pass black, bloody stools.

The lost fluids not only results in high fatality rates hovering around 50%, but facilitate the transmission of the illness. Furthermore, survivors of the disease can still transmit it via semen or breast milk.

In December 2013, a young boy—only eighteen months old—began playing with some bats inhabiting a tree truck the backyard of his home in the tiny village of Meliandou in Gueckedou district of the West African nation of Guinea. Recently, overseas mining and timber concerns had deforested the countryside around Meliandou, and so it was not surprising that the bats relocated so close to human habitations.

Unfortunately, several bat species are known carriers of Ebola, even though they are themselves unaffected by the disease.

On December 26, the boy suddenly fell ill and died within two days, having exhibited all the symptoms associated with Ebola.

Within a few weeks, his family too exhibited the same symptoms before dying. The infection spiraled outwards to local healers, relatives who had attended funerals, and staff at the local medical clinic. A woman who had been visiting the boy’s family traveled across the border to her home in Sierra Leone, where she too died of the illness.

By January, health officials had investigated the outbreak—and misidentified it as cholera. It wasn’t until March 22 that an analysis by the Pasteur Institute in France confirmed it to be Ebola.

By then, an infected person had already traveled to the Guinean capital of Conakry. Then on March 30, an infected traveler introduced the disease to the Liberian capital of Monrovia. The outbreak initially seemed limited in scope but then exploded in size June. Lacking adequate facilities and training, over 200 health care workers were infected, many of whom died. Amongst the casualties were several of the only 50 licensed doctors in Liberia.

In August, Liberian President Eleanor Holmes Sirleaf, the first female head-of-state in Africa, basically shut down public life in the nation for three months to curb transmission of the disease.

Meanwhile, in Sierra Leone, sick persons infected traditional healers they contacted for aid. When the healers died, people who attended their funerals were in turn infected, causing a chain reaction. While the disease initially ravaged only rural areas, on June 23 the first case in the capital of Freetown was detected.

Guinea, Liberia and Sierra Leone are all poor countries that lacked the medical resources to tackle the infection by themselves. Fortunately, international organizations worked proactively to deploy resources to combat those disease before they could spread further within and beyond those states. Hundreds of medical personnel risked their lives by traveling overseas to combat the illness in West Africa.

Though transmission across land-borders was issue, one measure that made containment easier was the lower volume of people traveling internationally by air from the states struck by the epidemic. Still, there were some connections via the overseas diaspora of the affected countries. Furthermore, healthcare workers dispatched to help combat the disease could themselves become infected.

But Ebola never really broke out in a major international metropolis—and for that, we again look at how individuals can affect the course of history.

On July 9, a Liberian diplomat named Patrick Sawyer took a jet from Monrovia to Lagos—the most populous city in sub-Saharan Africa’s most populous nation, Nigeria. He was due to attend an ECOWAS meeting at Calabar. Already feeling ill prior to departing from Liberia, he collapsed in the airport in Nigeria and was hospitalized at First Consultants Medical Center.

Sawyer was initially diagnosed with malaria—but a 57-year-old endocrinologist named Dr. Ameyo Stella Adadevoh in Lagos suspected otherwise, and had Sawyer quarantined while she performed blood tests. Sawyer insisted he had to leave, ripping out his intravenous tubes and struggling with the staff. Furthermore, the Liberian ambassador attempted to pressure Dr. Adadevoh into releasing Sawyer so he could attend a scheduled conference, describing her order to quarantine him as a kidnapping.

Adadevoh refused to listen, insisting that the quarantine was for the “greater good of society.” As the hospital lacked an isolation facility, she created a makeshift one.

The tests confirmed that Sawyer had contracted Ebola—in fact, his sister had died from the disease just two weeks earlier.

At this juncture, Nigerian journalist Simon Kolawole told The Guardian that Adadevoh’s could easily have protected her own life and that of her hospital by sweeping the case under the rug:

“There were various options in front of her when she discovered Sawyer had Ebola: one, quietly say ‘he no concern me’ and discharge him quickly to avoid contaminating the hospital; two, refer him to [Lagos University Teaching hospital], not minding the bigger consequences for the rest of Nigeria; three, act responsibly in line with the ethics of the medical profession and ‘detain’ him because of the peculiarity of the disease.”

Sadly, Sawyer died on July 24. Ten days later Adadevoh and three of her fellow staff too were diagnosed with the deadly disease and placed in isolation.

In total, there were 20 confirmed cases of Ebola in Nigeria, resulting in eight deaths, including Dr. Adadevoh on August 19, and three of her colleagues. Finally, in September 2014, Nigeria was declared Ebola free.

An outbreak in Lagos, a city of 16 million, could easily have dwarfed those Libera and Sierra Leone. Furthermore, it could have spread far more extensively across the globe from such an important economic hub. Thus, Adadevoh’s decision to quarantine Sawyer may have saved countless lives.

The World Health Organization deemed the West African Ebola epidemic largely contained by 2016, by which time it had counted 28,646 reported cases by May of that year and 11,323 deaths—though the true toll is likely higher.

Without a doubt, aggressive intervention by national and international health organizations, including the self-sacrifice of hundreds of medical personnel who contracted the disease while caring for others, led to the curbing of the epidemic before it could spread wider.

In 2019, researchers developed the first vaccine to prevent the spread of Ebola. Unfortunately, that year prior saw a new outbreak develop in the war-torn North Kivu and Ituri provinces of the Democratic Republic of Congo, resulting in over 3,300 cases and 2,250 deaths.