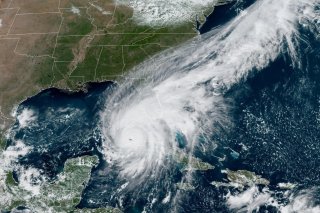 Maximum sustained winds hovered around 155 miles per hour as it hit the island of Cayo Costa near Fort Myers and Cape Coral, with the National Hurricane Center warning of a “life-threatening storm surge, catastrophic winds and flooding in the Florida peninsula.” The hurricane is tied for the strongest storm to make landfall on the west coast of the Florida peninsula, matching the wind speed of Hurricane Charley in 2004.

“It’s time to hunker down and prepare for this storm. This is a powerful storm that should be treated like you would treat if a tornado was approaching your home,” he continued.

Mandatory evacuations were ordered for more than two million people in flood-prone areas on the coast, and the National Weather Service directed individuals who stayed behind to move to upper floors in case of rising water levels.

By late afternoon, more than a million Florida utility customers were without power, according to PowerOutage.us. In Fort Myers, water levels surged more than six feet over a seven-hour stretch, causing some people to be trapped in their homes, a CNN meteorologist reported.

“I’ve been here since the mid-seventies, this is actually, by far, the worst storm I have ever seen,” Fort Myers Mayor Kevin Anderson told the news network.

The Weather Channel reported that Hurricane Ian’s center will move northeastward across southwest and east-central Florida. The storm may make it to the Atlantic coast at near hurricane intensity but is expected to eventually weaken to a tropical storm.

“Ian will likely emerge over the Atlantic waters late Thursday or early Friday before turning back toward the Georgia or South Carolina coasts as a tropical storm or low-end hurricane Friday and Friday night,” the station wrote.

Meanwhile, DeSantis has requested that President Joe Biden approve a major disaster declaration for all of the nearly seventy counties in his state, his office said in a news release. The Republican governor is also requesting that the White House grant the Federal Emergency Management Agency (FEMA) the authority to provide 100-percent federal cost share for debris removal and emergency protective measures for the first sixty days from the hurricane’s landfall.