Celera 500L: The Future Airplane That Could Usher in a Revolution? 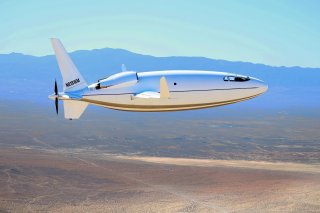 In June of this year, the bullet-shaped Celera 500L was seen conducting taxiing tests at the Southern California Logistics Airport, showing how far the Otto Aviation program has come in recent years.

The odd-looking airframe — which looks like something from a space movie — could actually represent a significant revolution in the aerospace industry, and in particular to all-important fuel efficiency — if Otto Avation’s claims about the Celera 500L airplane are true.

But what is laminar flow? Laminar flow is “the minimum drag solution for aircraft surfaces, and features smooth layers of airflow with little to no mixing of adjacent layers,” explains the Celera 500L website. “The design of the Celera fuselage takes advantage of an optimum length-to-width ratio to maximize laminar flow…and are therefore well suited for an aircraft like the Celera.”

The resulting fuel efficiency benefits are staggering. Otto Aviation claims that the Celera 500L’s range is 4,500 nautical miles. While most jets of a comparable size get a paltry two two-three miles per gallon of fuel, Otto Aviation claims that the Celera 500L gets an outstanding 18 to 25 miles per gallon of fuel — almost enough to get from Los Angeles to London on a single tank of fuel.

Not Only People & Packages

Not only is the Celera 500L more efficient, but it also boasts much greater internal volume as well. When compared to small but cramped jets like Beechcraft King Air 350 or the Citation CJ3+, the Celera 500L’s fuselage is much more spacious, with enough space to accommodate someone 6’ 2’’ or about nearly 1.88 meters tall.

Time will tell if the revolution that Otto Aviation is claiming to bring comes to fruition. According to company websites, the company expects to achieve FAA certification, build manufacturing facilities, and deliver the first commercial orders sometime in the mid- 2020s. If everything goes as planned, the Celera 500L could begin delivering parcels and people by 2025. Keep an eye on this aerospace manufacturer for more details about the Celera 500L in the future.