Censored? Vox Takes References To China Out Of Coronavirus Explainer 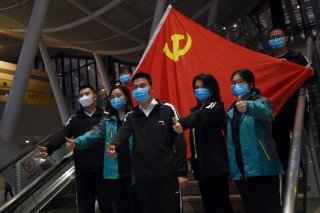 Liberal media outlet Vox removed a reference to China from the title of a video it published about the role that wildlife markets there play in the spread of infectious disease like coronavirus.

Vox’s video, which has more than 18 million views, was initially titled “Why new diseases keep appearing in China.” It is now titled: “How wildlife trade is linked to coronavirus.”

Vox acknowledged the edit in a description of the video on YouTube.

“Note the headline for this piece has been updated. Previous headline: Why new diseases keep appearing in China.”

It is not exactly clear why Vox edited the headline. The website did not immediately respond to a request for comment.

The Vox video, published March 6, detailed how China’s communist system encouraged the growth of open wildlife markets, such as one in Wuhan, where the novel coronavirus is believed to have started in mid-November.

Farmers at the markets sell a variety of wildlife, including birds, reptiles, bats and exotic animals.

Infectious disease experts have long noted that China is a hotbed for potential viral outbreaks because of its high population density mixed with its wildlife markets. The SARS pandemic of 2002-2004 is also believed to have originated at a wildlife market — known as a “wet market” — in China’s Guangdong province.

“I think this is a dangerous practice where it happens,” Dr. Michael Osterholm, a world-renowned epidemiologist said on the Joe Rogan podcast earlier this month.

“That’s one of the challenges we have China,” he continued. “We know that this is going to happen. It’s going to occur.”

The coronavirus that came out of Wuhan is believed to have originated in a bat before spreading to a person.

Some health experts have accused the Chinese government of lying about how widely coronavirus had spread within the country. Chinese officials did not acknowledge to world health officials that an outbreak was underway until late December, more than five weeks after the outbreak began.

The World Health Organization adopted the Chinese government’s slant on coronavirus, declaring on Jan. 14 that there was no clear evidence of human-to-human transmission of coronavirus.

The virus has since spread around the globe, with nearly 330,000 cases of human-to-human transmission registered in the world; 31,000 of those in the U.S.

The Chinese government’s role in allowing the spread of coronavirus has devolved into a debate over whether it is racist to use the terms “Chinese coronavirus” or “Wuhan virus.” President Donald Trump has sometimes called it the “Chinese virus.”

Vox has been among the liberal outlets accusing Trump of racism for noting the geographic origins of the virus.

“Trump’s new fixation on using a racist name for the coronavirus is dangerous,” reads a March 18 article at the site.