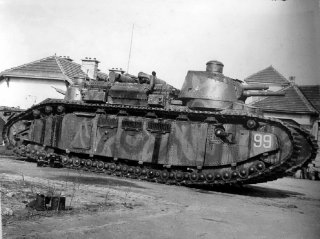 The Char 2C was a super-heavy French tank—and possibly the largest tank ever built.

Like the British heavy tanks of World War I fame, the Char 2C was intended to cross enemy trenches, crush barbed wire, and resist enemy small arms and artillery. In many ways it was remarkable. It had a very heavy gun for the time, and thick armor—but suffered from extremely low power output, which significantly hindered the tank’s cross-country ability. It never saw combat and was essentially a propaganda creation.

For the time, the Char also had very thick armor. Frontal hull armor was 30 millimeters thick, tapering to 22-millimeter side armor. Later production models had thicker, 45-millimeter hull armor. The massive tank was nearly thirteen and a half feet tall.

The armor combined with the general large size gave the Char a staggering weight of 69 tons, which outclassed all other European tanks. For comparison, some variants of the heaviest American tank now in service, the M1 Abrams, weighs just over 70 tons. Did I mention the tank had two turrets?

The high-profile main turret was accessed via a ladder and had space for three crew members. The main gun was a respectably powerful 75-millimeter French field gun that had been slightly adapted for tank use. The second rear turret housed a machine gun.

In addition to the two turrets, there were also three internal machine guns with hull mounts, one on either side of the tank’s hull, and one next to the driver. This extra firepower was intended to cut down anticipated infantry assaults.

Uniquely, the Char had two engines, one for each track. Originally they were of a domestic French design, but were later replaced with higher output German engines that were captured and rigged to power the tank. Due to engine unreliability, two mechanics were constantly on hand to attend to the engines should a breakdown occur.

Despite being singularly slow, the tank had otherwise good mobility, partly due to its enormous size and height, which allowed it to cross relatively high obstacles—being over 33 feet long also helped the Char to cross trenches or craters. It also benefited from having wide tracks, which helped prevent the heavy beast from becoming bogged down.

The Char 2C also had what is likely the largest tanker crew ever: twelve. Four machine gunners, a mechanic, an electrician, an electrician/mechanic, a driver, a main gun gunner, a loader, a commander, and a radio operator.

Because the Char 2C was mainly a propaganda tool, it never saw combat. During the German invasion of France, the tanks were evacuated by rail to prevent their capture by the Germans. While escaping the oncoming German Blitz, the train they were loaded onto was forced to stop due to a rail traffic jam. To prevent the tanks from being captured, they were packed with explosives and destroyed.

Though the Char 2C never served in combat, that’s probably for the better. Had the behemoth actually tried to slow the advancing German Blitzkrieg, it would likely have been smashed to smithereens.