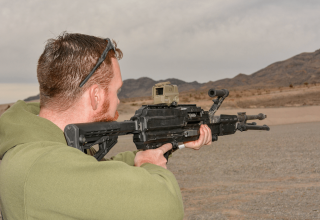 Key point: The military wants a new machine gun and Sig Sauer is happy to enter the contest.

Sig Sauer, Inc. appears to be going all in on military contracts, following their recent success with the M17 pistol, SURG upper receiver, and limited usage of the Sig MCX. However, their latest design, the Sig SLMAG, is their first attempt at making a proper machine gun, going past the rifles and pistols they are known for. While the Swiss SIG made several machine guns, including the mildly successful MG 710-3, it’s unlikely that any of the design expertise was passed on to Sig Sauer, Inc as the American “branch” was originally set up only as a distributor for pistols.

Prior to Sig’s announcement of the SLMAG, General Dynamic’s LWMMG was the only .338 Norma Magnum in an advanced stage of development. The SLMAG takes aim squarely at the LWMMG, coming in at four pounds lighter and featuring an advanced recoiling barrel mechanism. The SLMAG’s barrel visibly recoils during its firing cycle, which could be a significant difference in taming the stout recoil of the .338 Norma Magnum cartridge.

MARSOC is said to be evaluating the SLMAG as of June 2019, and a competitive evaluation of the machine guns seems imminent in the near future. But as SOCOM has not yet made a procurement plan for the .338 Norma Magnum machine gun ammunition, the competition isn’t likely to happen in the next year.

Either way, the SLMAG appears to be a critical part of Sig Sauer’s plans for military contracts in the near future. Sig’s submission for the machine gun part of the Army’s NGSW contract is said to be “very, very similar” to the SLMAG, suggesting that Sig plans to build a family of “next generation” machine guns on the basis of the SLMAG design.

But how good is the design itself? Not very much is known about it other than marketing blurbs, but the design appears to be fairly standard, featuring a three-position gas regulator, a “full length” feed tray cover similar to the PKM, and a multipurpose mounting lug that likely works with existing M240 mounting hardware. However, there are some newer aspects of the design. One of the gas settings on the regulator is for use with a suppressor, and the gun is said to be able to be loaded without opening the feed tray cover, something that could allow for faster reloads in the field.

Charlie Gao studied political and computer science at Grinnell College and is a frequent commentator on defense and national security issues. This article first appeared in 2018.