Check Out This Picture: You Are Looking at the Greatest Aircraft Carrier Ever 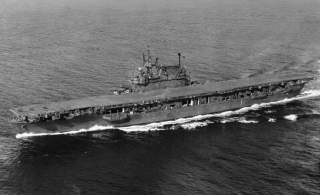