To Checkmate Venezuela's Maduro, America Should Sanction His Spanish Enablers 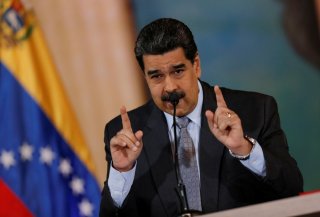 America is playing whack-a-mole with Venezuela’s Nicolás Maduro. After losing access to most of its oil revenue, the tyrant’s regime is overcoming U.S. sanctions by turning to narco-trafficking. To break this cycle and accelerate Maduro’s demise, U.S. sanctions ought to target the country’s that’s helping him cling onto power: Spain.

To be sure, sanctions thus far have had considerable effect, primarily by drying up the coffers of state-run oil giant PDVSA. Even Russia’s part-public Rosneft has ended up selling off its money-losing assets in Venezuela to the Russian state—one of Maduro’s last overt backers along with China.

However, Maduro has proved stubborn and his grip on power resilient through his ability to weather sanctions by finding alternative revenue sources. He has done this primarily narco-trafficking and Washington is yet to devise a policy that reckons with this elusiveness. Given America’s Jacksonian reluctance to topple him through intervention, spurring defections among Venezuela’s military top brass is the only hope to see him go. To achieve that, U.S. sanctions have sought to turn off the bribe spigot—a steady stream of kickbacks that ensures military officials’ loyalty to Maduro.

The strongman knows he can’t afford to lose the military, so when faced with sanctions, his regime has kept the kickbacks flowing by making cocaine Venezuela’s new oil. This is not entirely new—Maduro is known to have been long surrounded by rogue sidekicks eager to make a sleazy buck on the side. However, it’s been gradually picking up as Venezuela unleashes a massive government program that warrants parallels between Maduro and Panamá’s Eduardo Noriega. In 1989, a U.S. invasion toppled Noriega after his dabbling in drug trafficking became known to the CIA.

This is where the Department of Justice (DoJ)’s recent slew of indictments on narcotrafficking charges come in. On March 26, DoJ prosecutors pledged amounts up to $15 million for information leading to the capture of Maduro or fourteen of his cronies. This move was read in some press corners as a well-timed nail in the tyrant’s coffin that opportunistically seized on COVID’s ravages to Venezuela’s already emaciated society. The indictments were actually much longer in the making, their timing having more to do with freefalling oil prices in the wake of the Saudi-Russian standoff, according to the American Enterprise Institute’s Ryan Berg.

The Spanish government’s role has been more subtle than simply buying Maduro’s cocaine. Rather, it has enabled him to cling onto power by availing him with access to European markets to sell it. According to the PanAm Post’s Orlando Avendaño, members of Spain’s law enforcement bodies have colluded with regime officials to channel cocaine shipments from the Venezuelan state of Sucre into Europe, using Spain’s northeast region of Galicia as an entry point.

These anonymous scoops fit with a long record of friendly dealings between Maduro and Podemos, a far-left outlet now in Spain’s government as a junior coalition partner to the center-left PSOE. They would also cohere with Podemos’ recent access to Spain’s highest intelligence body, the Consejo Nacional de Inteligencia. The party’s leader, Pablo Iglesias, recently secured a seat on the CNI.

In Avendaño’s breakthrough reporting, Podemos has been the main beneficiary of Maduro’s drug money kickbacks in exchange for working through Spain’s police authorities to let the cocaine flow freely. Meanwhile, José Luis Rodríguez Zapatero, a former Prime Minister from PSOE, has worked to legitimize the regime in the international arena through his so-called “mediation” on Maduro’s terms, and Avendaño’s sources suggest his backchannels may have been funded with drug profits too. Additionally, Raúl Morodo, Spain’s former ambassador in Caracas, also faces charges for receiving €34 million in payments for largely fictitious consulting services to PDVSA during Zapatero’s tenure as PM.

The sum effect of this long trail of palm-greasing has been to markedly soften Spain’s stance vis-à-vis Maduro’s regime, a dynamic that continues to this day. Although Madrid had recognized Guaidó as the country’s legitimate president—a move since walked back by PM Pedro Sánchez—it has lobbied against further EU sanctions while senior cabinet members have been caught conspiring with their Venezuelan counterparts.

This was notoriously the case with Spain’s Transportation Minister José Luis Ábalos on January 20, when he breached EU sanctions to let Maduro’s right-hand Delcy Rodríguez land on Madrid’s Barajas airport—a scandal since dubbed “Delcygate.” Rodríguez is known to have seized the opportunity of her unlawful presence in Madrid to smuggle forty pieces of luggage past customs, later alleged by anonymous sources from Venezuela’s embassy in Madrid to be filled with money stacks and sensitive documents.

The detailed storyline needling these seemingly discrete events together may soon see the light. It will likely come from the mouth of one of its main characters, Hugo Carvajal, nicknamed “El Pollo,” the head of Venezuela’s military intelligence under Hugo Chávez between 2004 and 2011. In early March, a Spanish judge allowed his extradition to America on narco-trafficking charges after previously granting him safe haven in Spain.

But in the interim, even without Carvajal’s revealing testimony, the United States should challenge Spain for its leaders’ friendly dealings with Maduro’s narco-trafficking ring. In October last year, Bloomberg reported the U.S. Treasury’s Office of Foreign Assets Control (OFAC) was mulling sanctions against the Bank of Spain for allowing top regime officials looking to skirt U.S. sanctions to deposit money there, although it didn’t follow through with action. The case for sanctions on Spain has only kept building since.

Without punitive action on Podemos and PSOE officials, Maduro may simply replace oil sales with cocaine profits as the main funding source buttressing his oppression of the Venezuelan people. With their enabling of Maduro’s tyrannical rule in plain sight, now is the time for Washington to extend sanctions to Spain.

Juan Ángel Soto (@JuanASotoG) is Executive Director at the Madrid-based Fundación Civismo, where Jorge González-Gallarza (@JorgeGGallarza) is an associate researcher.