Chernobyl: The History of the Unthinkable Disaster That Killed Thousands 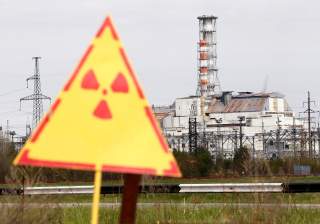 The meltdown of one of the four reactors of the massive nuclear power plant near the town of Chernobyl in northern Ukraine on April 26, 1986 was the result of badly flawed reactor design, sloppy construction and faulty emergency procedures.

The meltdown and its consequences amount to the worst nuclear accident in history. Potentially tens of thousands of people died. The exact number is hard to calculate, as you must count “extra” cancer deaths over the 150,000 square-mile contaminated area and across Europe for decades after the accident — and continuing even today.

But we can definitively count, and even name, many of the plant workers, firefighters, police guards, clean-up crews and area doctors and nurses who gave their lives — knowingly, in many cases — preventing the single-reactor meltdown from escalating into an even greater disaster.

One of the best new sources for this tragic tally is the new book from photographer and amateur Chernobyl historian Andrew Leatherbarrow. In Chernobyl: 01:23:40, Leatherbarrow aggregates much of the best writing on the disaster and blends it with his own firsthand reporting during a trip to the defunct, and still irradiated, plant in 2011.

“Having judged the merits of the various reports and read their respective critiques, I personally think the number [of dead] is perhaps somewhere around 10,000,” Letherbarrow writes, “but I want to stress that this is a completely unscientific guesstimate.”

Leatherbarrow points out that, according to official Soviet records, just 30 men and one woman died immediately and “as a direct consequence of the accident.”

The deaths began at the moment the number-four reactor at the newly-commissioned, 4,000-megawatt power plant, suffered a powerful steam explosion and graphite fire — the results of an ill-advised, late-night test program involving a reactor design with glaring safety flaws, nestled in a complex whose builders had cut more than a few corners.

Pump operator Valeriy Khodemchuk, 35, died at 1:23 a.m., the instant the reactor exploded. He’d been standing in the main circulating pump room, adjacent to the reactor and was virtually vaporized in the blast. His remains were never recovered.

The radiation in the reactor hall spiked to 30,000 roentgens per hour. To put that into perspective, 100 roentgens per hour for five hours is fatal. “The volume and intensity of radioactive particles thrown into the atmosphere on that night was equal to 10 Hiroshima bombs, not including the hundreds of tons of reactor fuel and graphite [a reactor component] that landed all over the plant,” Leatherbarrow writes.

Plant worker Vladimir Shashenok was in an instrument room near the reactor when the steam explosion demolished the chamber. The 35-year-old father of two “received deep thermal and radiation burns over his entire body,” Leatherbarrow recounts. Two workers who dragged the badly-irradiated Shashenok from the instrument room suffered radiation burns where Shashenok’s skin touched theirs.

Evacuated to the hospital in Pripyat, the town Soviet authorities had built from scratch to house atomic workers, Shashenok turned into one giant blister — according to his wife’s description — and died within four and a half hours.

Khodemchuk and Shashenok were the only two plant workers to die from the immediate effects of the reactor explosion. Twenty-nine other plant workers, firefighters, security guards and local police died from radiation exposure as crews scrambled to contain the fires and damage and prevent Chernobyl’s three other active reactors from also exploding.

“The Chernobyl plant staff were genuine heroes that night in the true sense of the word,” Leatherbarrow writes. “They did not flee when they could have. Instead, they selflessly stayed at their posts.”

Ordering younger workers to stand down, 47-year-old electrician Aleksandr Lelechenko repeatedly ventured into the irradiated electrolysis room in an attempt to effect emergency repairs. He absorbed enough radiation to kill five men but, after receiving first aid at the clinic in Pripyat, he rushed back to Chernobyl to work.

Lelechenko returned home to have dinner with his wife that night, caught a few hours of sleep then — you guessed it — went back to Chernobyl again. “We have to save the station,” he told his wife. He died two weeks later at a hospital in Kiev, one of 23 plant administrators, technicians and scientists to perish.

By 2:30 a.m., firefighters were on the plant roof battling blazes started by smoldering, and irradiated, graphite from the burst reactor. Fireman lieutenant Vladimir Pravik, 23, “realized straightaway that his team was ill-equipped and insufficient in numbers,” according to Leatherbarrow.

He got to work anyway — and died of radiation exposure on May 11. At least five other firefighters also died, most of them within a few weeks. So did two police guards — 58-year-old Klavdia Ivanovna Luzganova; and 53-year-old Yakaterina Alexandrovna Ivanenko, the only woman to die from the immediate effects of the incident.

They were buried in welded zinc coffins to prevent their corpses from contaminating the surrounding soil.

In all, 100,000 people in Chernobyl, Pripyat and surrounding towns underwent medical examination, according to Leatherbarrow. 18,000 required hospitalization.

By July most of the men and women who were at Chernobyl that first night and had received fatal dose of radiation were dead. So, too, were members of the first Soviet army unit to respond to the incident, as well as many of the medical personnel who treated the initial casualties. Merely being in close proximity to the worst radiation cases could be fatal.

Thousands more people would die as Soviet authorities launched one of the biggest disaster-cleanup operations in history. Untrained, under-equipped crews charged into the evacuated radiation zone to cleanse buildings, scoop up radioactive debris, reinforce the damaged plant, build containment structures in an attempt to limit the radiation’s spread … and shoot irradiated pets that evacuees had left behind.

By 1990, some 600,000 people had received the special certificates that Moscow gave to “liquidators,” as the clean-up workers are known. Many of them received protective gear including respirators and gas masks, but few wore them. They were too stifling in the heat and humidity of swampy northern Ukraine.

“How do you explain to your wife or girlfriend?” Leatherbarrow quotes one liquidator saying. “Most of us didn’t and we hoped we’d be alright.”

The Chernobyl Union, an organization of former liquidators, estimates 25,000 liquidators died from radiation exposure and 200,000 were crippled.

The official National Commission for Radiation Protection in Ukraine lists two million official “victims” of Chernobyl — and claims no fewer than 500,000, including 35,000 liquidators, have died. The commission calculates that the cancer rate for victims is three times the normal rate. Infant mortality for children of victims increased by a third.

Leatherbarrow claims many widely-circulated casualty figures are inflated. But for the liquidators in particular, “what matters is that they were brave beyond measure,” Leatherbarrow writes.

This much is indisputable. Chernobyl has continued to claim lives — for decades. It all started with poor pump operator Valeriy Khodemchuk.