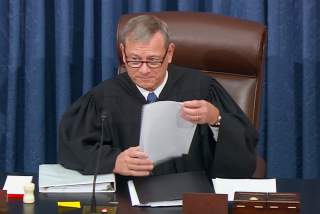 The Senate impeachment trial of President Donald Trump grew so heated early Wednesday morning that Chief Justice John Roberts stepped in to remind both the House impeachment managers and Trump’s defense team to “remember where they are.”

Democratic New York Rep. Jerry Nadler, one of the House impeachment managers, accused Senate Republicans and Trump’s defense team of orchestrating a “cover up” — an accusation that sparked a fierce rebuttal from Trump’s team. White House counsel Pat Cipollone, a key member of the Trump defense, told Nadler that he “should be embarrassed” for his remarks.

“I think it is appropriate for me to admonish both the House managers and the president’s counsel in equal terms to remember that they are addressing the world’s greatest deliberative body,” said Roberts, who is presiding over the impeachment trial.

“One reason it has earned that title is because its members avoid speaking in a manner and using language that is not conducive to civil discourse,” the chief justice continued.

“In the 1905 [Charles] Swayne trial, a manager objected when someone used the term ‘petty fogging.’ The presiding officer said the term ought not to have been used. I don’t think we need to aspire to that high a standard but I think those addressing the Senate should remember where they are,” said Roberts.