China’s Defense White Paper Means Only One Thing: Trouble Ahead 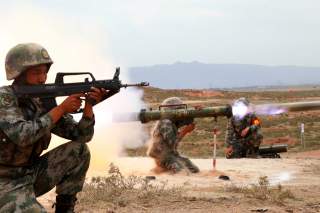 Lately, Beijing has been making forceful statements and backing them with impactful actions. Speaking at the Aspen Security Dialogue on 18 July 2019, Commander of the U.S. Indo-Pacific Command Admiral Phil Davidson described People’s Republic of China (PRC) Defense Minister General Wei Fenghe’s 2 June speech at the Shangri-La Dialogue as “quite chilling.” “Not only did [Wei] make it clear that he didn’t think Asia and the Western Pacific was any place for America, he said Asia wasn’t even for Asians—it was for the Chinese.” Then, “within 24 hours of that they tested a new nuclear ballistic missile,” the submarine-launched JL-3. On 8 July, at a forum of defense ministers from Latin America and Pacific island nations in China, Wei acknowledged that Beijing’s Belt and Road Initiative—in Davidson’s words, “was indeed a way to put a military foothold within other places around the globe.” “Within hours of that,” Davidson added, “they shot six anti-ship ballistic missiles—new ones that they have developed—into the South China Sea…the first time they have done an at-sea test.” To Davidson, “once might be a coincidence, but seeing this happen twice is indeed a message….” Most recently, on 24 July the PRC released “China’s National Defense in the New Era,” its first major military policy document for an international audience in four years. What statements, then, does this 2019 Defense White Paper make? What actions may follow from it?

Four years was a long wait for a document that generally restates what experts already know. Short on substantive updates, the report contains confusing, arguably contradictory phrasing and showcases simplistic, often unconvincing assurances designed for international public consumption. Many will disagree that “China is always a builder of world peace… and a defender of the international order….” Many will remain unpersuaded by the report’s assurance that China is “Never Seeking Hegemony, Expansion or Spheres of Influence.” Many, in Vietnam and across the globe, will question the claim that the PRC “has never started any war or conflict.” The “firsts” trumpeted in the official rollout are underwhelming for anyone trying to better understand the People’s Liberation Army (PLA); that purpose is much better served by consulting the Pentagon’s latest reports, together with the recent profusion of other U.S. government documents. Leading-edge analysts like Elsa B. Kania will always uncover nuances at the margins, but they do not depend on this single PRC source for those insights.

As an assertion of policy, however, China’s 2019 Defense White Paper clearly follows from General Wei’s remarks. It clearly embodies Xi’s self-dictated era, strategy, goals, reforms, and rhetoric. At its core, it reflects an unabashed Chinese Communist Party-led effort to make China great again at home and abroad while allowing no domestic or foreign foe to disrupt this self-assigned historic mission.

From Strategy to Implementation:

This year’s Defense White Paper replaces innovation and revelation glimpsed in previous iterations with an emphasis on implementation and justification. It lacks the 2006 edition’s extensive coverage of Border and Coastal Defense organizational structure, including the latest trends in “Militia Force Building,” and the 2015 edition’s substantive statements explaining the PLA’s transition to an unprecedented joint naval and aerospace orientation. The latter, China’s first-ever Defense White Paper on strategy, showed the PLA embracing new concepts and missions that represented significant innovations in safeguarding China’s national security. These doctrinal developments reflected the PLA’s adoption of a new strategic guideline in summer 2014, its ninth since 1956: “winning informatized local wars” (打赢信息化局部战争). Five areas merit particular mention as strategic emphases that the PLA has been implementing over the past four years.

First, in explicating China’s latest “military strategic guideline,” the 2015 Defense White Paper cited changes to the security environment, including accelerated worldwide use of “long-range, precise, smart, stealthy and unmanned weapons.” As for the nature of the local wars that the PLA must prepare to fight and win, it highlighted, in particular, the need to prepare for “maritime military struggle.”

Second, it emphasized comprehensive full-spectrum operations: peacetime probing and pressure, as well as combat readiness. It articulated a “holistic view of national security” encompassing both traditional and nontraditional security. Related tasks included “comprehensively manag[ing] crises,” “enrich[ing] the strategic concept of active defense,” and “establish[ing] an integrated joint operational system in which all elements are seamlessly linked and various operational platforms perform independently and in coordination.”

Third, it emphasized the need to safeguard Beijing’s increasingly complex, far-ranging overseas interests. It stressed that “the national security issues facing China encompass far more subjects, extend over a greater range, and cover a longer time span than at any time in the country’s history.” These include four “critical domains” and corresponding forces: “seas and oceans, outer space, cyberspace, and nuclear….”

Fourth, it contained unprecedented maritime emphasis. Notably, it stated, “the traditional mentality that land outweighs sea must be abandoned… great importance has to be attached to managing the seas and oceans and protecting maritime rights and interests.” It underscored determination to strengthen Chinese “strategic management of the sea.” It called for China to “build a combined, multi-functional and efficient marine combat force structure.”

Fifth, it emphasized growing power projection capabilities. “The PLAN will continue to organize and perform regular combat readiness patrols and maintain a military presence in relevant sea areas,” it stated. This entailed moving from “near seas defense” to “the combination of ‘near seas defense’ and ‘far seas protection’.” This first mention of the latter phrase (远海护卫) in a Defense White Paper suggested the need to develop a limited blue water navy.

In contrast to the 2015 Defense White Paper’s new strategic thinking, the 2019 edition reflects intensification, implementation, and justification. Perhaps the biggest change is in tone, aptly summarized in the South China Morning Post: “Cooperation is out in favour of antagonism and complaint.”

In framing world events, the report envisions a new international order emerging. But this trend is complicated by rising great power competition, with the paper placing particular blame on the United States and its key regional allies. The report also notes pronounced Russian emphasis on nuclear weapons, but appears to excuse it for the sake of larger bilateral efforts: Beijing and Moscow are attempting to show that their strategic partnership is not merely one of convenience. In the short run, the two great powers share interests in opposing efforts of the United States and its allies to maintain their equities, and key aspects of, today’s international system. And there are still substantial, albeit dwindling, areas of Russian weapons technology and expertise from which China can benefit greatly. Of course, none of this precludes future discord stemming from Chinese strength and Russian weakness in the form of border, migration, ethnocultural, and resource tensions; as well as economic asymmetries and China’s relentless quest to obtain critical technologies by all means necessary.

Worryingly, the Defense White Paper contains intensified rhetoric doubling down on domestic stability imperatives and sovereignty claims vis-à-vis Taiwan and the South and East China Seas. In explaining the report and its significance, the Central Military Commission’s Office for International Military Cooperation (OIMC) is unapologetically assertive: “China exercises its national sovereignty to build infrastructure and deploy defensive capabilities on the islands and reefs in the South China Sea, and to conduct patrols in the waters of Diaoyu Islands in the East China Sea.” The report’s wording resolving to prevent “East Turkestan” independence and to pursue cross-Strait reunification, in particular, appears stronger than before. Characteristically providing no specifics, the paper states, “Since 2014, the [People’s Armed Police] has assisted the government of Xinjiang Uygur Autonomous Region in taking out 1,588 violent terrorist gangs and capturing 12,995 terrorists.”

Regarding cross-strait issues, the 2019 report contains even stronger wording than the ten previous editions. As OIMC itself states: “The document especially points out that solving the Taiwan question and achieving complete reunification of the country is in the fundamental interests of the Chinese nation and essential to realizing national rejuvenation. The People’s Liberation Army will resolutely defeat anyone attempting to separate Taiwan from China and safeguard national unity at all costs, the white paper stresses, clearly conveying China’s firm will to oppose any interference by foreign forces and defend its own core interests.”

As mentioned previously, China’s 2015 Defense White Paper placed unprecedented emphasis on Beijing’s growing external security focus. Now, the 2019 edition states, “One of the missions of China’s armed forces is to effectively protect the security and legitimate rights and interests of overseas Chinese people, organizations and institutions.” Perhaps the most significant related event of the four-year interim was the August 2017 entry into service of China’s first overseas military facility, the “PLA Djibouti Support Base.” The report suggests that additional “overseas logistical facilities” are in development, but—characteristically—offers no details regarding their potential nature or location. Here it is interesting to consider recent reports of an agreement allowing China to use Cambodia’s Ream naval base. Cambodian and Chinese officials have issued vague denials that do not fully clarify the situation. In any case, it is worth recalling an event once described to the author: Premier Zhou Enlai reportedly told a foreign delegation that if China ever attempted to establish an overseas base, foreigners should join patriotic Chinese in thoroughly opposing the PRC government to prevent such an ‘imperialist’ development. One might imagine Zhou’s reaction were he to learn of a PLA “Base” of any sort operating thousands of kilometers from China. Now consider what other PRC policies might evolve over time.