Is China’s Evergrande Becoming the Next Lehman Brothers? 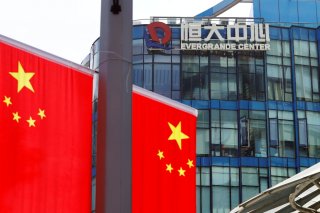 Looming bond payments, $300 billion in debt, a liquidity crisis, and a potential threat to global economic recovery on the level of the 2008 financial crisis; that’s the story of Evergrande, a private property firm in China that is brewing a panic amongst policymakers and investors across the world. While the firm just missed its bond payment, the main question here is two-fold: Will the Chinese government provide a bail-out to Evergrande? If not, and as a result of a default on its payments, will it cause a new global financial crisis?

Evergrande is a huge firm with assets amounting to 2 trillion yuan—equivalent to 2 percent of China’s GDP. However, with an inexorable amount of debt, the company is having a liquidity crisis with $669 million of coupon payments due this year and a staggering $7.4 billion of its bonds maturing next year. Although it raised $8 billion recently and the Chinese central bank has poured tens of billions into the system to ensure that the wheel of everyday business doesn’t come to a screeching halt, the end game is uncertain. At the time of writing, Evergrande has already missed its payment of $83.5 billion, entering into what is called a thirty-day grace period after which the company will effectively default.

Will the Chinese government provide a bail-out? There have been rumors that Evergrande may be nationalized or that it may be broken into three different companies. However, nothing is certain at this point. No one has heard anything from Evergrande after it failed to make its last payment. That said, while a bail-out seems feasible, it isn’t that simple. Such a strategy creates a dilemma for Chinese officials as bailing out the company can encourage such behavior elsewhere and, with Xi Jinping trying to reduce domestic debt, this approach can set a dangerous precedent. However, in the case that China lets Evergrande sink, the significance that this sector has for China’s economy is a real cause for concern; The real estate sector constitutes almost 30 percent of the country’s GDP.

If the Chinese government decides to wield the stick to teach businesses a wider lesson, then are we headed towards a crisis? Unfortunately, there is no definitive answer. However, denying the possibility of a full-blown financial crisis is as dangerous as the crisis itself and, in fact, could help usher in such a crisis. As Nassim Taleb has written, being in such an antifragile position is far from desirable. Instead, being in a more secure position, which stems from our recognition that the world can’t be effectively predicted, is the only way to avoid Black Swan events.

When U.S. Federal Reserve Chair Jerome Powell said that Evergrande’s debt problem seems “particular to China,” it is this mindset that puts policies in a fragile framework. In 2008, we all received a firsthand lesson in the complicated, convoluted layers of securitization in the form of sub-prime mortgages sold across the world. When complexity increases to such a scale, scientific models and algorithms don’t work (the story of Long-Term Capital Management is a nice example). The contemporary global economy is sensitive and prone to crisis as defined by rising inflation; soaring food prices; unprecedented climate events; increasing shipping and transportation costs; low business inventories; and record amount of margin debts, mortgage loans, and overall public debt.

In such a situation, any trigger can shift sentiment and cause a feedback loop, a vicious cycle forming a self-fulfilling prophecy. The element of contagion is highly swift in a crowd/mob (as Freud and Gustav Le Bon show in their work) and takes on a mind of its own. So, while Evergrande may not be that detrimental to the global economy, mob psychology may act as if it were. An intricately and deeply linked global economy has shown the power of a trigger and domino effect back in 2008-09.

Nevertheless, matters are even worse at the moment. With global investors having bought $527 billion of Chinese stocks/bonds in the last fifteen months, and Wall Street recently having its first Evergrande scare, the chances of a global financial crisis can’t be ruled out. No one knew it was going to be Lehman Brothers in 2008. If the Chinese government bails out Evergrande, it may solve the problem temporarily, but structural issues will persist. Yet if it does not, this has all the trappings of a trigger that can set off a new global financial crisis.