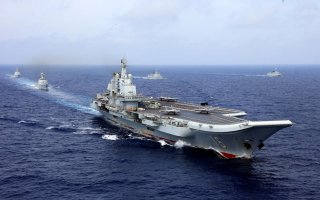 China’s first home-built carrier will soon fire weapons, launch fighter jets and coordinate with other surface warships in the South China Sea on a high-profile deployment, a moving signaling the rapid growth of the countries’ expansionist Naval ambition to project greater amounts of global power.

The Shandong, China’s first indigenous carrier, has deployed on its “third voyage” of the year, according to a Chinese government-backed Global Times newspaper, which is reporting that the carrier “could return to the South China Sea, where its homeport is located.”

“For its latest sortie, the Shandong will likely conduct training with carrier-based fighter jets and the use of weapons,” the paper writes.

It seems significant that the carrier will be homeported in the South China Sea, a move which may resonate as somewhat provocative to the United States and appear as an effort to fortify its territorial claims in the region and counter the regular U.S. presence in the vicinity.

While it seems unlikely that China’s carrier will engage in substantially provocative behavior, its planned use of weapons and growing list of aircraft options are certainly not lost on the Pentagon. It could be seen as a deliberate wish to answer the U.S. Navy’s “dual-carrier” attack preparations in the Pacific in recent months, and China has already sent the Shandong on several missions, which appear to threaten Taiwan by moving closer to its shores and conducting amphibious attack war preparations.

Also, while the new carrier is likely already armed with China’s existing J-15, there are numerous reports that the Chinese are now engineering a maritime, carrier-launched J-31 variant to rival the U.S. F-35B and F-35C.

The J-31s exterior appears to be a transparent F-35 “rip-off” in terms of its stealth configuration, yet a full margin of comparison, it would seem, might rely more fully on avionics, sensors, weapons, engine propulsion and maneuverability, all things less detectable to an observer’s eye.

The various sensor integration technologies or weapons applications of the J-31 might not be fully known, a circumstance which at least might allow for the possibility that the jet could, at least in some possible capacity, rival the F-35 jet. Its advantage or comparative attack ability, it would seem, might rest upon the range and fidelity of its targeting systems. Systems such as the F-35’s Electro-Optical Targeting System, for instance, offer the fifth-generation fighter an opportunity to see and destroy enemies well in advance of being detected. Should a carrier-launched J-31 possess any kind of comparable range, it certainly could offset an F-35 jet’s advantage to some extent. However, supremacy does not purely rest upon range, a J-31 would need to operate with something analogous to the F-35 jet’s Mission Data Files threat library, or fly with upgraded weapons actually able to guide toward, sense and destroy moving targets at those longer detection ranges.

Perhaps the most significant dynamic regarding how a J-31 armed Chinese carrier might perform might reside in the extent to which it could successfully network otherwise disparate maritime combat nodes such as deck-mounted sensors, drones, surveillance planes or even missile defense radar. The Chinese report does say the Shandong will interoperate with destroyers and other surface warships on this deployment, raising the interesting question about the degree to which the PLA Navy might be able to rival advancing U.S. surface-to-surface, surface-to-air or even surface-to-undersea networking technologies.