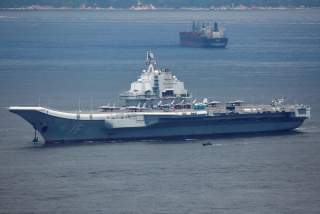 Want to buy a toy model of the Shandong, China’s newest aircraft carrier? Or how about some nice carrier-shaped jewelry or a carrier-themed baseball cap?

China’s government has been touting the nation’s growing fleet of aircraft carriers as a source of national pride, especially the Shandong, China’s first domestically manufactured carrier. Now, Beijing has a new idea: a line of creative items with carrier motifs, aimed at stirring the patriotic juices of young Chinese.

Photos in Chinese media showed a variety of products, including a scale model of the Shandong, badges, pendants and baseball caps emblazoned with wings and the number “17” (the Shandong’s pennant number in the Chinese fleet), and even sailor figurines dressed in pilot’s helmets or officer’s uniforms.

These items were designed by China Shipbuilding Culture and Technology Co., a subsidiary of China State Shipbuilding Corporation. The goal is to appeal to Chinese youth: the designers, led by Xie, were all born in the 1980s and 1990s.

“Xie spent many sleepless nights in the run-up to creating the first draft of designs, and over the past two and a half years, Xie's team submitted a total of twenty-eight designs for the ship's emblem and logo,” according to Chinamil.com, an official Chinese military website.

The baseball caps were intended to both look good, and highlight Chinese fashion prowess. “Xie saw how good the navy soldiers on the Shandong looked in their uniform, so he wanted them to also look stylish off duty, and designed a baseball cap for them and fans of the Shandong to wear,” said Chinamil.com.

“From the choice of fabrics for the caps to the detailing on the building blocks, each decision was made to present the quality of the 'made in China' brand.”

While extolling the “made in China” label as a sign of quality may draw sniggers from some Western consumers who have encountered shoddy Chinese goods, this sort of propagandistic merchandise is hardly unknown in the West.

Anyone who has ever been to a defense trade show knows that Western defense contractors give out plenty of swag, from tote bags emblazoned with a jet fighter the company manufacturers, to the ubiquitous ballpoint pens.

Indeed, you can find F-35 cufflinks, blankets and whiskey glasses on online craft story Etsy. Want a taste of a trillion-dollar stealth fighter program? Then get your F-35 cookie cutter, on sale for $1.99.

For the Chinese government, aircraft carrier merchandise is a way to inculcate Chinese youth with affection for the military. “"In the future, we want to design new cultural and creative products about the Shandong so that people from different ages with different hobbies can get a feel for military culture,” Xie said.