China’s J-20 Fighter Jet Is Fierce, But It Has a Numbers Problem 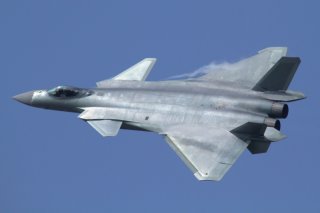 China is moving quickly to massively rev up production of its J-20 5th-generation stealth fighter jet in what could be viewed as a transparent effort to keep pace with the large numbers of F-35s now arriving to U.S. and allied forces.

Irrespective of any kind of performance comparison, there is at the moment a staggering difference in numbers. As of 2021, China has only built 150 J-20 stealth fighters, whereas the U.S. Air Force already has more than 280 F-35As and plans to acquire 1,763.

This is the Air Force alone, meaning the number does not include the growing number of F-35Bs traveling on amphibious assault vehicles with the Marine Corps or the now arriving carrier-launched F-35C Navy aircraft. Overall, current force plans call for 353 F-35Bs and 67 F-35Cs for the Corps, and 273 F-35Cs for the Navy.

On top of this, the number of allied countries now quickly adding F-35s is growing at an alarming rate in terms of planned fleet size and arriving aircraft. Overall, at least 13 countries operate or plan to operate F-35s. South Korea operates sixteen F-35s so far and Denmark and Norway are receiving and operating their F-35s. Many other countries are at various stages of acquiring healthy numbers of the jet to include Switzerland, Japan, Israel, Poland, Australia, Italy, The Netherlands, Belgium, Singapore, and the United Kingdom.  Japan, for instance, plans to acquire roughly 200 F-35s to include a mix of F-35As and F-35Bs and the UK already owns 21 F-35s with plans to acquire more.

What all of this means is that J-20 production is massively behind current F-35 production, something of great significance given that China intends for its J-20 to rival a U.S. F-22 or F-35.

This circumstance might help explain why the Chinese government-backed Global Times newspaper is quoting experts talking about a significant acceleration in J-20 production.

“China's aviation industry can satisfy any level of demand from the PLA (People's Liberation Army) Air Force,” a Chinese J-20 production official told the Global Times.  The paper goes on to say that the developmental curve for the J-20 is, in terms of production, getting much faster and more efficient due to advances in industrial technology.

"Particularly for equipment like the J-20, we need to do it faster in all aspects, including designing, production, testing, and crafting," Wang Haitao, deputy designer of the J-20, told the paper.

How fast could China close the gap or in any way attempt to respond to its massive deficit when it comes to the production of 5th-generation stealth fighters? That isn't clear. However, China is known to have an ability to “flex” industrial capacity when it comes to military platforms, particularly in the realm of shipbuilding.

However, China has a long way to go, and many modern military leaders, strategists, and tacticians stand by Sun Tzu’s famous warfare maxim that “mass matters.” This may be particularly true when it comes to the F-35 given the range of its sensors and ability to network across formations of aircraft with a secure Multifunction Advanced Datalink. This of course expands the operational envelope and allows attack air forces to disperse while coordinating targeting and other mission specifics.