Is China’s Military Doing Enough to Fight the Coronavirus? 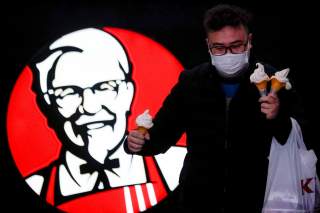 As the coronavirus spreads across China, the nation’s media is portraying the Chinese military as coming to the rescue.

Yet some observers say that China’s military has been strangely absent in the fight against coronavirus, a flu-like virus which has already inflicted nearly 2,000 deaths in China, and has disrupted much of the nation’s economic and social life.

Chinese media is highlighting air force cargo flights ferrying medical aid to the city of Wuhan, epicenter of the outbreak. “A total of eight transport aircraft, namely three Y-20s, one Il-76 and three Y-9s, left their bases across China on Monday morning [February 17], arriving in Shenyang, Zhanjiang, Lanzhou, Datong, Chengdu, Shanghai and Xinjiang to load personnel and supplies, before taking off again to arrive at Wuhan's Tianhe International Airport,” said one news report. It was the fourth such mission.

Beijing is leveraging these relief efforts to tout the military might of the People’s Liberation Army (PLA). “This means a large number of Chinese soldiers, together with heavy weapons and equipment like tanks and anti-aircraft installations, can be deployed by air in a short time instead of being transported slowly, allowing them to form combat capabilities in the frontline very quickly to grasp valuable battle opportunities,” a Chinese defense expert told China’s state-run Global Times newspaper.

At least 3,500 PLA medical personnel have been deployed to Wuhan, a retired officer told the South China Morning Post, an independent Hong Kong newspaper, in early February. The PLA is even recalling veterans with medical and disaster relief experience, the officer said.

Yet Peter Singer, an American defense expert, believes the Chinese military’s response to coronavirus has been lackluster. “The first group of PLA medical units began to arrive in Wuhan only on January 24, nearly a month after the virus began to spread,” he wrote in Defense One in early February. “They arrived in relatively small numbers: three medical teams were reported to have been sent from Shanghai, Chongqing and Xi’an, totaling 450 personnel. The subsequent lack of any major following deployment was striking, especially as needs ranged from supply to construction, such that regime officials even turned to making false claims of building hospitals in record time.”

The initial lack of response was puzzling given that Wuhan is home to several major military units, including a key Chinese military logistics base, Singer added.

In many nations, the military is often called upon for disaster relief. In the United States, floods and hurricanes often see state National Guard units—and sometimes federal military units—called out during disasters such as Hurricane Katrina, which devastated New Orleans in 2005. Equipped and trained to operate in adverse conditions, the military provides vital support for overwhelmed local emergency services.

The perception that federal disaster relief was lackadaisical during Hurricane Katrina damaged the image of President George W. Bush. But in an authoritarian nation like China, where the government must appear strong and competent, inept relief efforts are more than a disaster. They could undermine the Communist Party’s legitimacy in the eyes of the Chinese people.