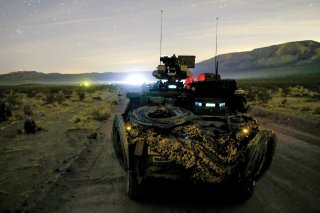 Is China attempting a “rip-off” or copycat version of the U.S. Army Stryker armored vehicle decades after its emergence? It looks that way, according to photographs and written descriptions of China’s new VN22 armored vehicle which recently made its debut at a Chinese airshow in Zhuhai, an area in the Southern part of the country.

Photographs in the Chinese government-backed Global Times newspaper show what looks almost exactly like a U.S. Army Stryker, just with six wheels instead of eight. The vehicle is rectangular with a cornered or edged protruding side and a weapons mount on top. The VN22 photograph also shows what looks like a rotating turret with a mounted cannon.

The Chinese paper quotes a spokesperson from the VN22s maker, China North Industries Group Corporation Limited, saying “its design is futuristic, and its front looks a bit like Iron Man."

Even beyond its mere appearance, which is virtually identical in configuration to the U.S. Stryker, Chinese descriptions of the vehicle’s mission scope also mirror those described by U.S. Army ground vehicle commanders.

“VN22 also showed its flexibility during the operation to the audience. This armored vehicle can be used for transporting combat troops, patrol, reconnaissance, counter-terrorism, and peacekeeping missions,” the Global Times writes.

Sure enough, the U.S. Army Stryker vehicle is built in a number of variants to include a reconnaissance vehicle, infantry carrier, counterterrorism vehicle, and humanitarian missions as needed. The U.S. Stryker also has a medical evacuation (MEDEVAC) variant as well as applications of heavy firepower on the move, command and control, and direct-attack vehicles.

The Chinese report even cites the roadside bomb-deflecting ability of the VN22, stating it could “survive an explosion of 10 kilograms of TNT.” Sure enough, the U.S. Army made an enormous effort to reconfigure the Stryker vehicle to better withstand Improvised Explosive Device (IED) and roadside bomb blasts about ten years ago. Existing U.S. Strykers were reconfigured with a blast deflecting “Double-V Hull” underbody to massively improve survivability for soldiers riding in the vehicle. The underbelly of the Chinese VN22 was not visible in the photograph, but it does appear deliberately raised from the ground to ensure blast fragments are dispersed or at least need to travel farther to impact the vehicle.

Despite all these apparent similarities, and China’s well-known and documented tendency to copy U.S. weapons specs and configurations, the vehicles may also have differences. Operating with six wheels instead of the eight on the U.S. Stryker, the VN22 is reported to achieve great maneuverability due to its having a smaller pivot radius and turning circle.

The most glaring difference between the Stryker and VN22 can simply be summed up by the word “time.” The Stryker emerged roughly twenty years ago, just in time for the start of Operation Iraqi Freedom, something which raises questions about just how much more modernized or current is the VN22. Any consideration of this question, however, needs to account for the massive and ongoing series of U.S. Army upgrades to its Stryker platform. The U.S. Stryker is now armed with improved 30mm cannons, programmable ammunition such as airburst or proximity-fuse rounds, and a recently added ability to fire Stinger and HELLFIRE missiles for short-range-air-defense.