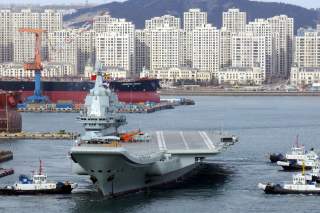 Chinese authorities banned maritime traffic from a 1,300-square miles zone in the Yellow Sea off of northern China earlier this month. The same area had been blocked off just a few days before the announcement, as the Chinese navy conducted four days of sea trials of the Type 001A, China’s first indigenous aircraft carrier.

Which suggests that the People’s Liberation Army Navy is quickly conducting another set of sea trials just days after the first set was completed, according to the South China Morning Post.

“The fact the aircraft carrier needed to be tested again within two days suggests that the navy may have found some technical problems in last week’s sea trial that needed to be fixed immediately,” said Song Zhongping, a military analyst based in Hong Kong. “It’s fairly typical before an aircraft carrier is officially commissioned. We can expect to see more intensive sea trials in the future.”

Chinese military sources told the Post that the initial round of sea trials probably consisted of takeoff and landing tests, conducted not far from port in case of emergency.

The 65,000-ton Type 001A is China’s second carrier, with first place going to the Liaoning, a rebuilt Soviet vessel. But the Liaoning has been relegated to training duties as China earnestly learns how to conduct carrier operations for a carrier force that may eventually comprise a half-dozen vessels.

That leaves the Type 001A, launched in 2017, with the burden of being China’s first combat aircraft carrier. And Chinese naval aviation may have reached the point where the 001A can be adequately tested.

“China has built more than 50 J-15 fighter jets and trained dozens of aircraft carrier-based pilots, and the squad is big enough now to deploy on both the Liaoning and the Type 001A,” a Chinese military source told the Post.

However, naval analyst Li Jie suspects that the Type 001A has yet to meet its goals for achieving Initial Operational Capability, when a ship is capable of meeting minimum operational requirements. “The Liaoning has sailed on the high seas in several naval drills now, with different carrier battle group formations, but the Type 001A still needs more time before it can meet all the IOC requirements.”

“As well as testing the propulsion system, they also need to make sure the aircraft carrier’s electronic communications can connect with all the military radio systems properly,” Li told the Post.

None of this should come as a surprise. There is always a learning curve, especially for a type of warship that a navy hasn’t operated before. And even the old pros make mistakes. The U.S. Navy has more experience with building and operating aircraft carriers than any fleet in history. And yet the problems with the new $13 billion Ford-class carriers is staggering, including high-tech electromagnetic catapults that haven’t been adequately tested and munitions elevators that don’t work. The Royal Navy—which pioneered carrier operations—is dealing with faulty engines on its new Queen Elizabeth-class carriers.

It is natural for China to experience teething problems with its carriers. There is no reason to assume that China will not master them. But the Type 001A’s issues are also a reminder that China will need time—and much trial and error—to become a carrier power.