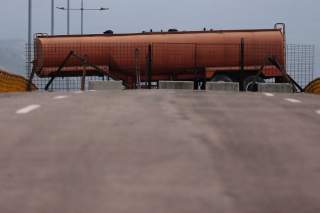 Venezuela is now gripped by an acute political crisis as President Juan Guaidó’s government—officially recognized by the United States, most of the European Union, and many of Venezuela’s neighbors—vies for power with the regime of Nicolas Maduro. This raises questions for Chinese creditors, who likely now wonder how a new Venezuelan government might treat the large oil-backed debts owed to Chinese lenders.

In theory, Venezuela’s massive oil resources offer ample support for at least $50 billion in loans that China has provided since 2007, perhaps $20-to-$25 billion of which remain outstanding. Yet for Chinese lenders exposed to Venezuela’s chaos, the country’s oil shows itself to be an increasingly illusory underpinning for the loans. The situation is becoming a classic example of “geoeconomics gone wrong” and highlights the reality that even large money outlays often fail to purchase lasting strategic influence in chaotic places. To the contrary, such influence is, at best, temporarily “rented” and can be rapidly degraded, if not outright destroyed, by events beyond the lender’s control. Venezuela’s current situation provides a dose of sober reality for Beijing’s Belt and Road Initiative, for which large-scale strategic financing from China’s parastatal lenders are a central element. 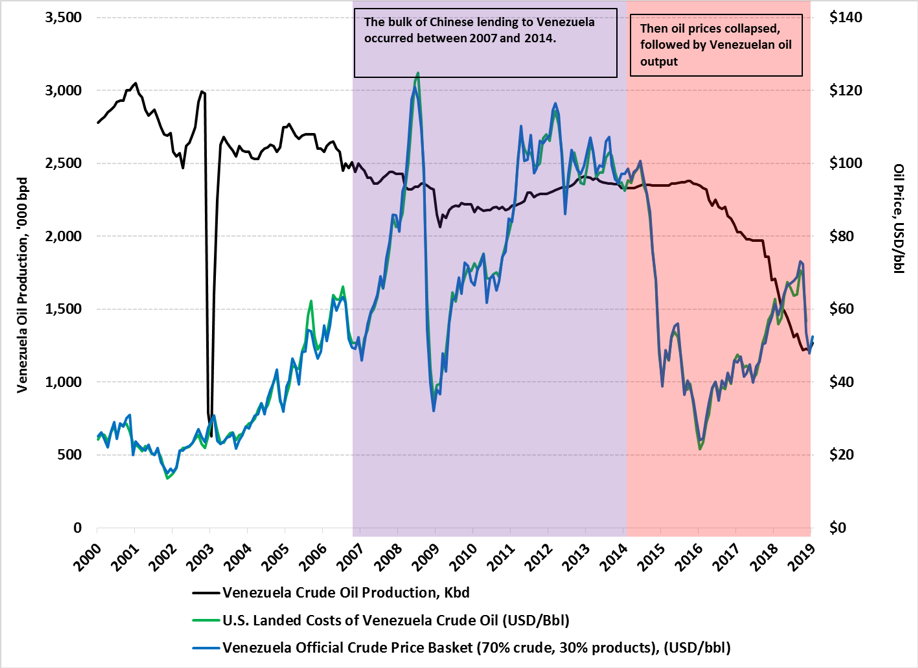 Because oil is pledged for loan repayment based on a fixed price per barrel, declining Venezuelan oil production and global prices lower than those which predominated during the 2007-2014 peak loan activity period exert two key effects. First, Venezuela must commit much more oil than anticipated to service the loans, which reduces the volume of oil available for sale to cash-paying consumers. Second, if Venezuela cannot come up with the necessary oil volumes—or needs to preserve cash for other imperatives—lenders must negotiate forbearance arrangements, which delay loan payback and trap capital in a low-return application.

In a nutshell, China now finds itself in a very different position that it would have imagined a decade ago when the oil-backed loans seemed like a logical and efficient path to securing badly-needed oil supplies while also quietly building a foothold of influence in the United States’ backyard. Venezuela’s currently outstanding debts to China are not an existential financial challenge for the cash-rich Middle Kingdom. But if a new Venezuelan government restructures and “haircuts” them, the sting will offer a painful reminder of the risks inherent in lending to unstable sovereigns lacking the rule of law.

Even though the oil is not “collateral” for the loans in a purely legal sense of the word, the historically-strong production flows and presence of large reserves clearly helped influence Chinese lenders’ decisions to loan money to Venezuelan entities. Moreover, it led Beijing to do so at lower interest rates than would otherwise be feasible for borrowers with Venezuela’s sovereign risk profile.

The repayment risk problem is especially acute when loans are being made on a fundamentally strategic, as opposed to commercial, basis. If a resource-rich debtor defaults on commercial debt or loans, its creditors can seek to seize assets located abroad such as refineries, arrest shipments of oil and other commodities, and so forth in order to recover outstanding balances. But for a lender acting as an arm of state influence, the menu of options is substantially constrained. The process of trying to attach the delinquent borrower’s foreign assets to recoup the loan entails complex legal maneuvers that are rife with uncertainty and often take many years to execute. More pointedly, pursuing repayment in such a manner will generally be viewed as a hostile act by the debtor government, and would almost certainly destroy the strategic diplomatic relationship the loans were originally intended to bolster.

Deals can be struck—such as the “grace period” under which Chinese lenders allowed Venezuelan borrowers to only pay the interest on their outstanding obligations during a forbearance period from 2016 to April 2018. Yet such compromises impose real costs on the creditor, particularly since the interest payments the Venezuelans are making with physical oil are likely well below what the Chinese funds could be earning if invested elsewhere. Indeed, the effective interest rate being paid by the Venezuelan debtors on the largest single loan tranche may barely equal to the “risk-free rate” offered by ten-year U.S. Treasury Bonds.

The unfolding Venezuelan debt saga appears to be rapidly turning into an expensive lesson for China. Among the core takeaways: a veneer of commerciality cannot compensate for the fundamentally non-commercial objectives oil-backed loans actually aim to fulfill. Furthermore, political crises—particularly those that result in a change of government—credibly threaten to invalidate the hydrocarbon “soft collateral” that likely helped soothe Chinese lenders’ risk fears. Much of the value of soft collateral depends on the ruling government’s willingness to mortgage current and future natural resource production in order to service loans. Because such resource flows financially underpin state functionality, they are often a vital national security interest in the producing country and are intensely politicized during periods of unplanned political transition.

Things are thus far playing out exactly this way in Venezuela. Chinese lenders were forewarned that loans could be on a more precarious foundation than would have been expected in 2007-2014. But it is unlikely that the Chinese strategic financiers anticipated such a complete breakdown in Venezuela and the concomitant threat it would pose to Beijing’s financial and geostrategic interests in the country.

In China’s case, there are factors likely to moderate the behavior of whatever government succeeds Maduro in the event he departs. Foremost among these is the reality that Chinese refineries are basically the only other plants in the world aside from those on the U.S. Gulf Coast capable of collectively handling several hundred thousand barrels per day or more in heavy, sulfurous Venezuelan crude. Nevertheless, events in Venezuela should offer a wakeup call as to the risks Beijing’s geoeconomic loan portfolio faces in Pakistan and other Belt and Road locations suffering from systemic internal dysfunction that could unpredictably erupt into major crises.

Gabriel Collins is the Baker Botts Fellow in Energy & Environmental Regulatory Affairs at Rice University’s Baker Institute for Public Policy and is the co-founder of the China SignPost™ (洞察中国) analysis portal. He can be reached at [email protected]. The opinions and positions expressed in this analysis are exclusively the author’s private views and do not represent the views of Rice University’s Baker Institute for Public Policy.