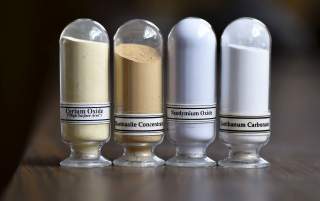 As Washington and Beijing brace for a protracted trade war, Chinese sources increasingly discuss the potential for weaponizing the Middle Kingdom’s major mineral advantage: rare earth elements (REE). Some link this impending “Battle of Rare Earths” (稀土之战) to the statements of Deng Xiaoping himself. Several things are already clear. China has long understood its REE preeminence and has sought to strengthen it. Beijing has leveraged it in recent years, and now threatens to do so again. But just how usable a weapon is China’s REE production preponderance and its current near-dominance in processing REE ores into finished metal?

China National Radio’s website shows a photo of “Deng noting in a speech he made January 1992 during his Southern Tour, ‘The Middle East has its oil, China has rare earths’ “中东有石油, 中国有稀土.’” Various sources quote Deng elaborating during a speech in Jiangxi, “China’s rare earth deposits account for 80 percent of identified global reserves, you can compare the status of these reserves to that of oil in the Middle East: it is of extremely important strategic significance; we must be sure to handle the rare earth issue properly and make the fullest use of our country’s advantage in rare earth resources.”

Now Beijing seeks to brandish that advantage for dramatic effect. On May 29, People’s Daily published a strident commentary declaring that “the U.S. wants to use the products made by China’s exported rare earths to suppress and counter China’s development. The Chinese people will never agree. At present, the United States completely overestimates its ability to manipulate the global supply chain….” Importantly, this authoritative publication states, “I advise the US side not to underestimate China’s ability to safeguard its own development rights and interests, don’t say I didn’t warn you!” (奉劝美方不要低估中方维护自身发展权益的能力, 勿谓言之不预!).

This “rare Chinese phrase that means ‘don’t say I didn’t warn you’” is clearly deliberate and important. “The specific wording was used by the paper in 1962 before China went to war with India, and ‘those familiar with Chinese diplomatic language know the weight of this phrase,’ the Global Times, a newspaper affiliated with the Communist Party, said in an article last April. It was also used before conflict broke out between China and Vietnam in 1979.” As Bill Bishop emphasizes in his Sinocism newsletter, China also employed these warning words “before the Zhenbao Island Incident with the USSR in 1969.” An authoritative Xinhua commentary, republished by People’s Daily, adds: “if necessary, China has plenty of cards to play.”

So exactly what options does China have for potentially weaponizing its commodity advantage? In theory, Chinese mineral might is fearsome as Beijing is the world’s leading REE producer. Despite global consumers’ attempts to diversify supply sources, PRC suppliers remain the dominant players—particularly in the area of processing ores into actual usable materials. In fact, the sole American REE producer, MP Materials, sends REEs it mines in Mountain Pass, California, to China for processing. Moreover, Beijing guards this advantage jealously. As Australian industry advisor Dudley Kingsnorth puts it, “China and rare earths is a bit like France and wine—France will sell you the bottle of wine, but it doesn’t really want to sell you the grapes.”

Now, Beijing appears to be pressing this advantage, while Washington seeks to mitigate risks. China has already raised tariffs from 10 percent to 25 percent on REE ores that MP Materials sends to China for processing. Meanwhile, Washington has left REEs off the list of its next set of prospective tariffs covering roughly $300 billion in Chinese goods.

So far, however, this is still an initial posturing. How has Beijing wielded REEs as a tool of geoeconomic influence in the past, and how might it do so today?

The extant signature example came in the fall of 2010 when the Chinese government restricted exports of rare earths to Japan following Tokyo’s detention of a Chinese fishing boat captain after he collided with two Japan Coast Guard vessels near the disputed Senkaku Islands. China’s ban fanned fears of over-dependence on Chinese suppliers for critical commodity inputs. Yet the Japan REE embargo saga illustrates at least three factors that would seriously undermine a Chinese attempt to weaponize REEs against the United States.

First, a new attempt to wield REEs aggressively would turbocharge diversification measures. The 2010 embargo helped catalyze the restart of the Mountain Pass mine in California (one of the world’s largest rare earth deposits) and Lynas Corporation’s Mt. Weld operations in Australia. A 2019 REE embargo against the United States would not only reinforce the rationale for having mines outside of China, but perhaps more importantly, would dramatically strengthen the case for creating additional REE ore processing capacity outside of China. Some observers argue that China’s present processing preeminence locks in its strategic position in rare earths markets for “years” to come. Yet if Beijing weaponizes the minerals against American interests, this could galvanize and accelerate existing plans to build U.S.-based REE processing capacity.

Second, an REE embargo would reinforce the narrative that China-based commodity supply chains are inherently untrustworthy. This would not only reinforce REE supply diversification measures such as those described above, but could also prompt companies to re-think China-based sourcing more broadly. If a sufficient mass of foreign firms decided that sourcing higher-end products and critical input materials from China posed unacceptable risks, a rolling exodus of such operations would set back Beijing’s ability to realize many of its key industrial development objectives, such as moving higher up the global manufacturing value-added chain.

Third, an REE embargo could lead to much more damaging reciprocal American responses—such as more severe restrictions on the export of semiconductors and other critical technology subcomponents that many Chinese firms literally cannot survive without. China controls substantial parts of the global rare earths supply chain, but as described above, users can diversify their sources. They can also adapt their production processes to use less of the materials, incorporate alternatives, or prioritize some consumers—such as the defense sector—over others until alternative supplies become available.

In addition, an embargo would likely raise REE prices, which would give Chinese suppliers strong economic incentives to smuggle REEs into the market. Even if the metals were not sold “directly” to American customers, simply by making their way into the market at a premium price they would help ensure that necessary supplies are available. And the premium price would likely not be overly burdensome to manufacturers or the final consumers of REE-containing products. Whereas a motor vehicle literally contains hundreds of kilograms of steel, and is thus very exposed to changes in steel commodity prices and physical availability, REE are more like “vitamins of chemistry.” In other words, a product often cannot function without them, but a given phone, computer, etc., only needs a very small quantity to achieve its functionality goals. An iPhone, for instance, may contain as little as one-fourth of a gram of rare earths. This means that for neodymium, one of the densest rare earths, a piece of metal the size of an easily smuggled Coca-Cola can would be sufficient to produce at least 10,000 iPhones. Thus, the effects of even significant price increases would be diluted by the rare earths’ small share of overall production materials input. This dynamic ultimately helps underpin market adaptability in the face of politically-motivated supply restrictions.

Now for the other side of this Sino-American trade war equation. In contrast to the dozens of China-based rare earth producers and refiners (and the attendant likelihood of embargo leakage), the highest-end semiconductors and semiconductor production equipment are controlled by a handful of firms that guard the intellectual property of their high-added-value products jealously. These are predominantly domiciled either in the United States, Western Europe, or close U.S. allies in Asia such as Japan and South Korea. Such high concentration and political alignment would likely make enforcement of tighter restrictions highly feasible. And without certain levels of chip performance, many tech products will either perform at a much lower level—or in some cases, not work at all. In other words, semiconductors are generally much less fungible than are rare earths.

And so, China would also find itself on the wrong end of the adaptation timeframe. As one former rare earths trader puts it in a recent interview with The Verge: “Producing rare earth concentrate is near trivially simple…I, or any other competent person, could produce that from a standing start within six months in any volume required.” During a crisis, even an intensely regulated jurisdiction such as the United States could find ways to override the environmental hurdles that currently dis-incentivize domestic rare earth ore refining. But while customers of Chinese rare earths could likely adapt, draw down inventories, and source and process rare earths using alternative channels, Chinese firms reliant on imported semiconductors would face a much longer, harder, and uncertain adaptation slog. Jay Huang Jie, a former Intel Managing Director in China, noted that if China seeks to build its own chip industry, it “…should be prepared for a marathon of at least a decade, which will also be loss-making [along the way].”