China’s South China Sea Strategy Is All About Taiwan 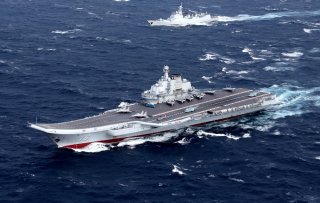 Is the occupation of the South China Sea by the People’s Republic of China (PRC) the equivalent of the German militarization of the Rhineland in 1934? Will there be a Taiwanese Anschluss like the annexation of Austria in 1938 which followed the Rhineland operation? Can world peace last if the world gives China a Munich-like deal? These questions are not idle historical speculation. Our new spatial analysis suggests that China is poised to move its strategic goalposts again and soon, reminding of the momentous events of the 1930s.

In 2016, the PRC effectively annexed the South China Sea. That year, China refused the findings of the Permanent Court of Arbitration in the Hague regarding the Chinese occupation of several reefs and islands and the extension of Chinese maritime borders over 1,000 miles away from the mainland. The court found China in violation of international law; The unilateral declaration of sovereignty over a portion of the high seas is not only contrary to the international laws as signed by China but an indication of hostility. Since then, China has maintained control over the islands and the surrounding areas by force, elbowing out or even sinking ships seen as a threat. In historical terms, it is equivalent to Germany’s occupation of the demilitarized Rheinland in 1934, in contradiction to the provisions of the Versailles Treaty. Is this a momentary crisis or a sign of future trouble? Our geostrategic investigation suggests that a crisis on par to that which preceded World War II could be expected.

Just like in 1934, the great world powers, including the United States, let the 2016 event pass with no more than some diplomatic declarations. The only contemporary nuances are the freedom of navigation operations of the great power navies. Just like in 1934, the common wisdom is that China’s act is a sign of folly, lacking any strategic rhyme or reason, which will sink the perpetrator in the strategic morass that will cost more than it is worth.

In 1934, the great powers thought that giving Germany something that it would ultimately get anyway was not worth the trouble, while the act of petulance would one day be paid back in spades. Today, the great powers similarly see little to gain from opposing China more than symbolically. They hope that the day will come when China may need the great powers, and the bill for their benevolence will include the cost (plus interest) for its current South China Sea adventure.

In both situations, what the great powers ignore(d) is the grand strategy fueling the ambitions of the global challengers. What we are dealing with today is no different from what we had to deal with in the 1930s: a global challenge to the existing hegemons. The South China Sea is not a small local affair, just like the occupation of the Rhineland was not about a stretch of land at the Franco-German frontier. Today, as yesterday, we are witnessing the first steps toward far more ambitious goals. Germany was on the path to reclaiming continental hegemony. China is on the road to claiming its own Xinping-Monroe doctrine: Asia for the Asians. These goals, in turn, opened and may open up still even more grandiose dreams. Once established as the European hegemon in 1939-1940, Germany sought Euro-Asian hegemony, spawning tendrils across all continents. Similarly, once established as an Asiatic hegemon, China may aspire to dominate the Western Pacific and Eastern Indian Ocean, while its New Silk Road (Belt and Road Initiative) will establish its global presence in Africa, Latin America, and even Europe, creating the springboard for an even more adventurous course toward completely replacing the United States as a global leader. Of course, there are significant differences between Nazi Germany and neo-Communist China, both in terms of ideology and immediacy of military action. Germany thrived on racism, isolationism, militarism, and impulsive action. China builds its plans one brick at a time, mixing and matching ideologies. It derives power from global trade and military ambiguity rather than forthrightness. Yet, both powers’ ambitions should be measured with the same yardstick, and they are equally grandiose.

However, while it is easy to predict the past, it is hard to convince present audiences of future scenarios. The fact that China effectively occupies the South China Sea may be a step toward a strategic scenario to be played against the backdrop of the Great Dictator scene, in which Adenoid Hynkel, played by Charlie Chaplain, bumps the world off his rump.

What can we surmise about China’s intentions in the South China Sea? Although we have no crystal ball, we have some hard geographic, military, and economic facts. Analyzing what configurations of power projection and claim China has created through its South China Sea expansion, we can tell what its intentions will be in the short run. Surprisingly, or not, analyzing the map with spatial statistics, we see that the South China Sea is the step to the next move, which points to Taiwan. The map below, in which the redder the color, the more intense the Chinese interest and potential for conflict, shows clearly where the next flashpoints will be: Taiwan, the Philippines, Okinawa/Senkaku Islands, and the Malacca Strait, or what the Chinese official call “the first island chain.” 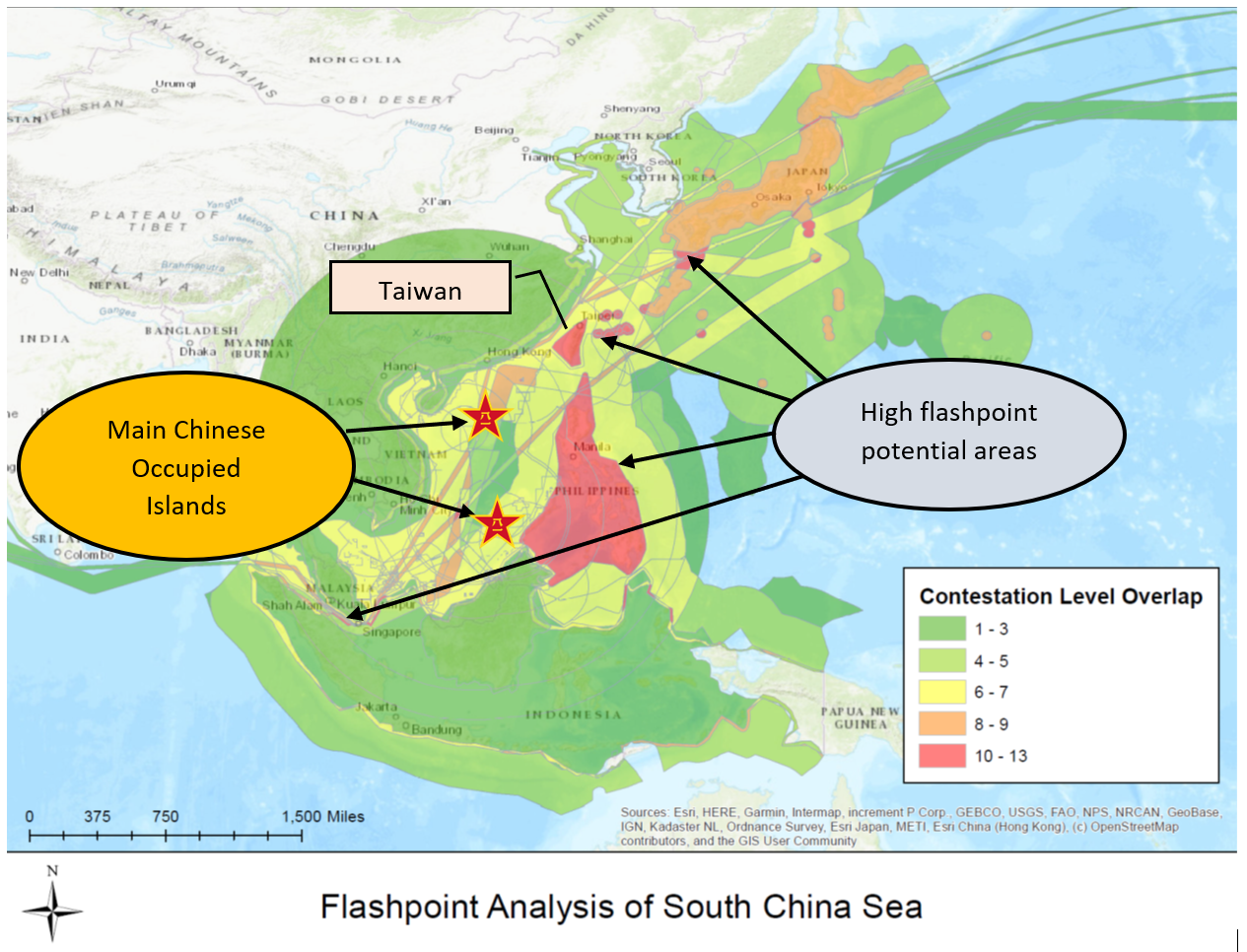 Map generated by flashpoint analysis performed by the FORCES initiative at Purdue University.
An interactive version of the map can be found at https://arcg.is/1Le4yj. A copy of the methodology can be obtained by request from the authors.

The red spots and areas were created by projecting Chinese strategic ambitions induced by its vast sea claims and the militarization of the seas over local and global claims, resources, and commons, such as sea lanes or fishing grounds. Statistically, we obtained the red flashpoints by valuing and overlapping the territorial claims (accepted and unaccepted by international law), military power projection potential (missile or aircraft ranges), the topography of the shipping and telecommunication lanes, and the natural resource claim areas. The layers were rank-valued. The highest were the ones that reflected the most valuable assets (immediate coastal areas), while the lowest were the ones least likely to be contested, such as shipping lanes.

The logic of the analysis is straightforward. The overlap of highly contested areas can lead to more intense conflict. When all is said and done, we obtained the areas in the brightest red labeled “high flashpoint potential areas.” The red spots clearly indicate that the areas of maximum conflict are not in the middle of South China Sea, around the military installations occupied by China (the two red stars), but farther to the east. The almost continuous line of red hotspots to the right (east) of South China Sea includes Taiwan as a cornerstone. The line traces the next objective of China’s strategic plan: the first island chain. This is quite far from the islands the media has been focusing on, the Paracel and Spratly archipelagos, found right in the middle of the South China Sea (red stars). But this is precisely China’s intention. In a masterful move, reminiscent of the game of Go (Weiqi), China has surrounded a lower value area of the board (the South China Sea) to create the premises to capture a much more valuable area (Taiwan and Western Pacific) in a different direction.

Thus, over the next five to ten years, we may expect China’s ambitions to follow Germany’s, and with no hyperbole. Not only are the events similar, but the stakes are similarly enormous. If China positions itself for future operations in the Western Pacific, these will not be in vain. China aims to incorporate Taiwan as a sign of reclaiming its full power in the same way that the Austrian Anschluss announced that Germany is back and with a vengeance.

The weight on the shoulders of the world leaders, including those in Beijing and Washington, is terrible. There will likely be several attempts to settle the emerging conflict in a peaceful manner. The most critical strategic question of the day is how to avoid turning such a peace agreement into another Munich.

Sorin Adam Matei, Ph.D. is Professor and Associate Dean of Research and Graduate Studies at Purdue University and the FORCES Initiative Director.

The views and opinions expressed are those of the authors and do not necessarily reflect the official position of Purdue University.