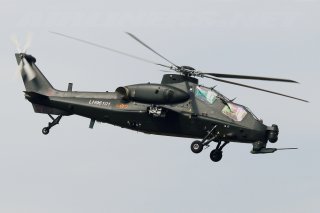 Chinese attack helicopters were on display at the Singapore Airshow this week, offering a window into the People’s Liberation Army’s (PLA) air attack potential.

The Chinese Z-10 helicopter looks like a blend between the U.S. Army’s AH-64 Apache attack helicopter and several prototypes of new Future Vertical Lift attack and reconnaissance aircraft. The Z-10 can carry both air-to-ground and air-to-air missiles and rockets and is armed with a 23-millimeter gun. The Z-10 has a range of 1,120 kilometers and an empty weight of about 5,100 kilograms.

“Missiles will be used against armored vehicles and tanks, and rockets and the gun will be used against infantry targets,” the Chinese state-backed Global Times wrote in December 2021. “When attacking a hostile tank group, the Z-10 will usually carry eight air-to-ground missiles and two multiple rocket launchers … The missile has an accuracy of 85 percent and each Z-10 sortie can at least destroy six enemy tanks.”

The Global Times also reported that the Z-10 may have some stealthy characteristics.

“At least one Z-10 attack helicopter featured in the drills is the latest, upgraded variant with upward-facing exhaust openings, which are expected to reduce the chopper’s infrared signals and make it harder to target,” it says.

The Z-10’s exhaust and side structures appear to be conformal and rounded in what could easily be seen as an attempt to increase stealth characteristics. The exhaust also does look horizontal, if not upward facing, as the report explains.