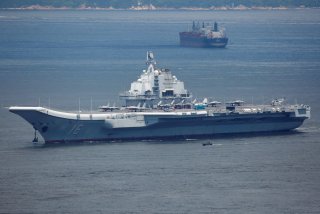 Unlike the Ukrainian-built Liaoning, China’s first carrier, and its first domestically built carrier, the Shandong, the third Chinese carrier is not built with a ski-jump kind of aircraft take-0ff ramp. Rather, it looks more like a large, flat-decked U.S. carrier, and the use of an electromagnetic catapult is exactly the kind of technology now used by the U.S. Ford class.