Is China About To Brutally Crackdown on Hong Kong's Protestors? 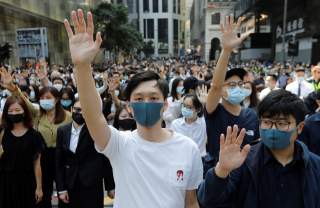 For months, transfixed populations around the world have watched as anti-government, pro-democracy demonstrations continue to convulse Hong Kong. The frequently violent disruptions are producing highly negative economic effects. More than a month ago, data indicated that hotel bookings in Hong Kong were down 40 percent from a year earlier, as both business travelers and tourists sought to avoid being caught up in the turmoil. Demonstrations—and sometimes pitched battles between protesters and police--at Hong Kong’s international airport have produced extensive flight cancellations, and the airport has had to shut down entirely on several occasions.

Thus far, the central government in Beijing has adopted a relatively restrained approach and not trampled on Hong Kong’s legal autonomy. President Xi Jinping’s regime continues to let its appointed chief executive for Hong Kong, Carrie Lam, take the lead in managing the crisis. With Beijing’s approval, Lam even formally withdrew the proposed extradition law. That measure, which would have enabled Beijing to “request” the extradition of Hong Kong dissidents to be tried in mainland courts where even basic due process protections are absent, triggered the initial protests last spring.

Xi’s government apparently believed that such a concession, combined with a low-key approach that relied on Hong Kong police to maintain a modicum of order, would gradually cause the demonstrations to fade away. That scenario did not occur; throughout the summer, the protests actually grew larger and more vocal. Recently, the number of protesters has dropped, but the confrontations with police have become increasingly violent, and arrests on various charges more frequent. Moreover, the demands of the demonstrators are now much more extensive than demanding the withdrawal of the extradition statute. Hong Kong activists are pushing for major democratic reforms, especially making the entire legislature and the chief executive into elected offices, which would dramatically dilute Beijing’s authority and influence.

Signs are growing that Beijing’s patience may be at an end. There certainly appears to be rising pressure on Hong Kong authorities to adopt a much harder line toward protesters. Not only have arrests soared, but police are now using live ammunition and have wounded several protesters. More worrisome, there are indications that a full-scale crackdown, perhaps even using People’s Liberation Army units, could be imminent.

At a November 11 press conference, Carrie Lam bluntly labeled protestors “enemies of the people,” an especially ominous term coming from the appointee of a communist regime. Hong Kong riot police stormed the Chinese University of Hong Kong on November 12 in an attempt to take control. Not only is that campus a logistical hub for the pro-democracy movement, but most internet connections in the city pass through the Hong Kong Internet Exchange housed there. If Xi’s government is contemplating sending in security forces to occupy the city, gaining control of the Exchange would be a crucial prerequisite to control the flow of information. Finally, there are media reports that fleeing mainland students and other residents from the People’s Republic are being evacuated by boat. Since there have been violent attacks on mainlanders in recent weeks, such an exodus might just reflect growing nervousness. But it also could be preparation for a PLA operation in Hong Kong.

One certainly hopes that we are not about to witness a Tiananmen Square-style massacre. But even a less bloody crackdown would have far-reaching consequences and severely damage Beijing’s standing in the world. One key question is how the United States (seemingly preoccupied with the Trump impeachment circus) and its East Asian allies would react to a brutal move by Chinese security forces. At a minimum, there would likely be a push for severe economic sanctions against China, with all the adverse implications for East Asia’s stability and the health of the global economy. The American news media should turn their obsessive gaze away from the impeachment spectacle at least briefly to monitor some nasty crises developing in various locales around the world, including in Hong Kong.

This article by Ted Galen Carpenter first appeared at the Cato Institute.