China Alone Should Not Determine the Fate of American Aircraft Carriers 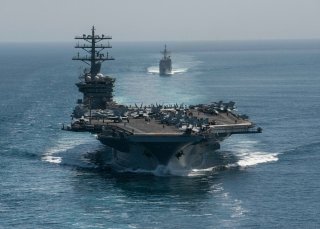 When the late Harvard professor Samuel Huntington wrote his influential article “National Policy and the Transoceanic Navy” in 1954, the U.S. Navy stood nearly unchallenged in the vast oceans. Having prevailed over the adversaries, aircraft carriers were elevated to their glory therefore becoming the centerpiece of America’s naval force. Additionally, the United States built its first supercarrier, USS Forrestal, in the same year, signaling that competing with Washington in global commons would be a costly business. The primary objective of dominating the open oceans was accomplished.

But with the absence of serious competitors, the control of the oceans was poised to lose its strategic significance, and Huntington warned that the Navy’s relevance would diminish if it failed to formulate a pertinent strategic concept for the post-WWII order. Although the Navy has traditionally been Washington’s first tool of power projection and the U.S. Constitution mandates the service’s consistent existence, changing geopolitical realities along with growing maintenance costs compel the service to periodically redefine its strategic concept. The rationale is to ensure that the Navy adapts to the everchanging world and does not become a burden on the nation’s treasury.

The post-WWII environment largely revitalized Dutch-American political scientist Nicholas Spykman’s rimland thesis pivoting the U.S. Navy to a new mission of projecting power along Eurasia’s peripheries. While pressuring the Soviet Union, its continental rival, the service would also support ground operations by deploying devastating air power to the rimland of the Eurasian landmass.

In the immediate aftermath of the Cold War, the carriers once again demonstrated their centrality during the Gulf War of 1991 and the Iraq War of 2003. In both cases, the Navy’s flattops were instrumental in backing the ground troops serving as land bases for the initial attacks.

But with the emergence of China as a regional power, the practicality of aircraft carriers has been severely questioned and many have concluded that the flattops will be sitting ducks in case of a conflict with Beijing. Partially motivated by America’s uncontested ability to amass military power near the adversarial shores, the Chinese have heavily invested in missile systems—most prominently the DF-21s and DF-26s—to push American carriers away from their adjacent waters.

Furthermore, unlike the United States, the People’s Liberation Army Navy (PLAN), for now, does not have global responsibilities and can concentrate its fleet in the nearby seas to deny access to foreign navies.

This undoubtedly raises concerns over the Navy’s future capabilities to operate safely in the South and East China Seas. While such discussions are warranted, rendering carriers inherently obsolete is a mistake.

Granted, surface fleets are exposed to enemy fire at all times, and the loss of a single capital ship may alter the course of the entire battle. The Falklands War of 1982 is a point in case when the British submarine sent an Argentine ship to the bottom of the ocean forcing Buenos Aires to withdraw its aircraft carrier from the harm’s way.

But the plain answer is that no such other versatile platform has been invented to enforce America’s status as a global power than carriers. The open system built into the carriers allows the Navy to adjust the flattops for various missions by adding or removing certain aircraft and weapons systems. For instance, to support counterinsurgency operations, carriers abandoned long-range aircraft and replaced them with technologically advanced fighter jets better suited for this specific purpose. Alternatively, carriers can extend their air wing to be reoriented for the looming great-power competition.

Put simply, China alone should not determine the fate of aircraft carriers.

The very fact that the Chinese have also embarked on an ambitious carrier program should be indicative of their own plans of developing sea control and power projection capabilities. Moreover, Beijing’s third aircraft carrier will reportedly feature a game-changing Electromagnetic Aircraft Launch System (EMALS) analogous to America’s Ford-class carriers. Responding to this news, Admiral Chris Grady, commander of U.S. Fleet Forces, commented, “Good on ‘em. It makes the argument that carriers are important.”

Counterintuitive as it may seem, the rise of the Chinese navy has given the United States notable leverage to affect Beijing’s risk calculus. As Toshi Yoshihara argues, land powers have historically been risk-averse to endangering their fleets and China will be no exception. If the Chinese missiles pose a threat to American flattops, the United States and allies can similarly target Beijing’s capital ships. As a matter of fact, Washington’s allies including Japan and Taiwan have developed anti-access strategies to keep Chinese warships on the edge. Tokyo’s anti-ship cruise missiles are just one example.

Carriers have served America well and have been quite flexible each time the Navy has adopted a new strategic concept. Rather than dismissing the flattops altogether, the debate should revolve around issues such as ballooning construction costs, lengthy delays, and ailing acquisition systems. Now that America’s newest supercarrier USS Gerald R. Ford is undergoing final trials and is projected to deploy in 2022, a meticulous evaluation must be made for future projects to avoid the problems that have plagued this carrier in the first place.