China and India: The Cold War No One Is Watching 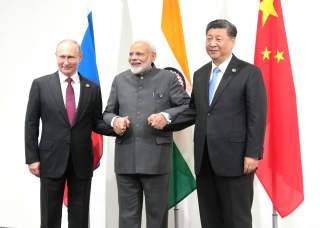 Key Point: China's ability to manufucture weaponry is much more efficient and advanced than India's.

“Rich nation, strong army,” was the adage that drove Japanese modernization – both civilian and military – in the late 19th and early 20th centuries. Today it is a rallying cry for other Asian countries seeking great-nation status. A corollary to this saying might be that great nations have great arms industries.

China and India share this outsized ambition to be a “great power” in Asia, if not the most powerful. The two countries have, respectively, the largest and second-largest militaries in Asia, as well as the highest and second-highest defense budgets. And both have huge domestic defense industries, dedicated to providing their armed forces with the best weapons possible.

Home-grown armaments and nationalism go hand-in-hand in both China and India. A country cannot consider itself to be capable of great-nation status, so the argument goes, if one’s military is dependent on foreign suppliers for its weapons. Outside sources are always subject to embargoes or other restrictions, and overseas sellers are usually loath to part with their best and most advanced military technologies.

Finally, as a matter of pride, a great power cannot conceive of itself parading another country’s military equipment. The priority, therefore, is always on securing a domestic source of advanced weaponry, as quickly as possible.

It should not be surprising to know that both nations – India since independence, and China since the founding of the People’s Republic – have given considerable importance to establishing and nurturing large domestic arms industries. In so doing, both countries took very similar routes to defense industrialization. Both countries undertook a soup-to-nuts approach to defense, manufacturing everything from small arms to nuclear weapons. Additionally, they established huge military research and development (R&D) bases so as to control every stage of armaments production, from initial idea to deployment.

The most important goal was the development and manufacture of a broad array of indigenous weapons systems. If completely indigenous production was impossible in the short run, the licensed-production of foreign-designed systems as a second-best solution, but one to be replaced by a domestic solution as soon as possible.

Moreover, both countries placed their faith in government-owned and -operated businesses – state-owned enterprises in China, so-called “defense public service undertakings” (DPSUs) in India. In both cases, armaments production was isolated from the rest of the economy, given special protection from market forces as well as a great deal of autonomy in how they operated. It was all about meeting production quotas, and such considerations as efficiency, cost-effectiveness, and even quality control were usually thrown out the window.

Not surprisingly, therefore, by the late 1990s, both the Chinese and Indian arms industries were bloated, inefficient, technologically impaired, bureaucratic monsters, more dedicated to protecting jobs and industrial fiefdoms than developing and manufacturing the kinds of advanced weapons systems their respective militaries demanded. And while both New Delhi and Beijing introduced far-reaching reforms into the rest of their national economies – generally with remarkable results – their respective defense industrial bases remained mired in protectionist, socialist-style industrial bantustans.

To be fair, both China and India, starting in the late 1990s or early 2000s, undertook efforts to reform and transform their defense industries into modern military-industrial complexes. These included injecting limited competition (sometimes from the private sector), paying greater attention to quality control, and giving the customer (i.e., the military) more oversight over defense R&D.

Interestingly enough, communist China has made more progress than democratic India in introducing free-market ideas into its defense industry. In a strictly comparative sense, China has more (albeit still quite limited) competition in defense projects (e.g., two different fifth-generation fighter aircraft development programs); it has opened up more of its defense industry to private-sector funding; it has developed and implemented initiatives to promote civil-military integration and the exploitation of locally available commercial high technologies; and it has more seriously attempted to make local arms producers more responsive to the needs of its main consumers (i.e., the PLA).

In addition, it appears to have been much more successful when it comes to kick-starting indigenous military R&D, acquiring and developing technologies and weapons systems that approach the global state-of-the art, and therefore putting the Chinese military on the path toward greater economic self-sufficiency in arms acquisitions. More than anything, too, China has consistently and aggressively underwritten the modernization of the arms industry in the form of steadily increasing defense budgets. This improved arms industry is, in turn, paying off in terms of making China a more formidable force to reckon with.

India’s defense industrial base, on the other hands, appears to be still stuck in its old Nehruvian paradigm of government-led development and growth. While the rest of India appears to be racing into the 21st century, powered by a dynamic, free market-oriented economy, the defense sector remains mired in the country’s socialist and protectionist past. Consequently, the nation is still predominantly saddled with an oversized, non-competitive, non-responsive military-industrial complex – capable, it seems, of only producing technologically inferior military equipment, and even then, never on time and nearly always way over their original cost estimates. Moreover, the defense industry, along with government-run R&D institutes, has been able to fend off nearly every attempt at reform and restructuring undertaken by the central authorities.

Given such longstanding deficiencies in its defense industrial base, it is little wonder why India’s drive for great-power status has been so fitful. And while India might yet be able to turn things around when it comes to defense industrial reforms – and Modi’s recent efforts are certainly aimed in the right direction – past experiences are cause for skepticism.

Of course, China’s defense reforms still have a long ways to go. Compared to western models of armaments production, the Chinese arms industry remains highly statist in form and function. But compared to India, it is the epitome of efficiency and the state-of-the-art. In the regional race to become the Great Power of Asia, China is way ahead on points, and not the least because China’s military is increasingly equipped with very modern and very capable, indigenously sourced armaments.

Richard A. Bitzinger is a Senior Fellow and Coordinator of the Military Transformations Program at the S.Rajaratnam School of International Studies, Nanyang Technological University, Singapore. The opinions expressed here are his own. This piece first appeared in Asia Times here. This piece was originally featured in May 2016 and is being republished due to reader's interest.