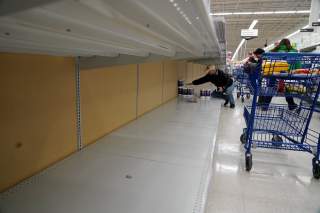 “Question: Why do Western people like toilet paper better than masks?” a friend of mine asked me on WeChat.

Around the world, in different countries affected by coronavirus, people hoarded consumer goods. But there have been differences in different countries about what kinds of products have been hoarded. During my time reporting from Nanjing, China, I noticed fruits and vegetables were being cleared off the shelves, as well as face masks, but toilet paper was never in higher-than-usual demand. One Chinese microblogger joked, “Chinese people hoard rice. Americans hoard firearms. Italians hoard toilet paper. Dutch people are bosses… They hoard pot…”

Toilet paper hoarding has also been observed in Canada, the UK, and Germany, but it is not entirely limited to the Western world: Japanese also emptied stores. However, China and Korea really did not experience such panic buying on a large-scale.

“Chinese people think toilet paper has nothing to do with virus prevention,” Tiger Li, a graduate student of public policy at George Washington University, said.

CCTV sent a reporter to CostCo to ask Americans why they were hoarding toilet paper. In the words of the anchor, “Why buy toilet paper? Many local people said they themselves didn’t quite understand.” One man’s response sums it up: “Since people are buying it, everybody is running out, so it’s just good to have.”

America’s panic buying spree has also been noted in the Korean press. Jungang Daily featured an article about mass purchases of firearms, blaming it in part on Asian-Americans buying guns to protect themselves from racist assaults.

Sungeun Hong, an office worker in Seoul, said that Koreans were also perplexed by the American propensity to stockpile toilet paper.

“No. We didn’t buy toilet paper at all. Yes, that is weird. I understand toilet paper and soap are important for hygiene, but it seems too much,” she said.

Indeed, South Korea hasn’t experienced widespread hoarding of anything except perhaps face masks. (Shortages were blamed on Chinese tourists by some.) The government ramped up distribution of 4.5 million masks and increased fines for hoarding.

Amateur sociologists have searched for answers in the communalism of Confucian culture, the individualistic-capitalism of the United States, high levels of trust in the Korean government’s response, and in the fact that South Korea has been already been facing existential, in the form of North Korea, for years. They already have boxes of ramen in the bunker!

Jessup Jong, an Aitchison Public Service Fellow in Government at Johns Hopkins University who has contributed to The National Interest, says some Koreans actually were panic buying once the pandemic started to spread to South Korea.

“People were hoarding at first, including toilet paper,” he said. “It’s not like nobody was stockpiling anything. My parents even urged me to buy toilet paper, because they saw it was out of stock in Korea.”

But the panic buying trend calmed down quickly in Korea.

The second part of the question concerning face masks has also been a point of controversy in Asian countries. Either it’s been questioning whether Europeans not wearing face masks allowed coronavirus to spread or criticizing people of non-Asian descent (expats or citizens) for not following the local custom of wearing face masks. In Hong Kong, Apple Daily has published photos of Caucasian residents walking around outside with their faces uncovered. In early February, Thailand’s health minister said any tourist not wearing a face mask should be deported.

Larry Salibra, an American-born long-time resident of Hong Kong and founder of New Internet Labs,  launched the mini-website “Wear a [F-ing] Mask” to try to convince other people to wear (f-ing) masks. “I lived through … SARS in Beijing and Hong Kong in 2003 and was proud that I did not wear a … Mask. … I was … wrong. …surgical masks keep you from spraying droplets on other people when you talk, cough or sneeze. These droplets might contain … viruses which will … infect other people. …masks protect other people as much or even more than they … protect you,” he wrote.

There has been limited evidence as to how effective masks might be at preventing the spread of coronavirus, but Asian media typically emphasizes the arguments in favor of wearing masks, while Western media typically downplays the effectiveness of masks. U.S. Surgeon General Jerome Adams told Americans to “stop buying masks” while Hong Kong doctor Pak-Leung Ho credited universal mask-wearing (among the Chinese ethnic population, at least) as one of the reasons for Hong Kong’s effective response.

Ultimately, it comes down to force of habit and what people are used to.

“It’s really the cultural issue, it seems,” Jessup Jong said. “Masks are considered a little socially awkward in the United States, because you are hiding your face. Or you might already be seen as being sick. In Korea, masks are already used by Kpop stars and such.”

Image Credit: A customer picks up some of the last of the toilet paper inside a Meijer, in preparation for the coronavirus in Dayton, Ohio, U.S., March 13, 2020. REUTERS/Kyle Grillot.