China, Be Afraid: The U.S. Navy Is Upping It's Game With 20 New Destroyers 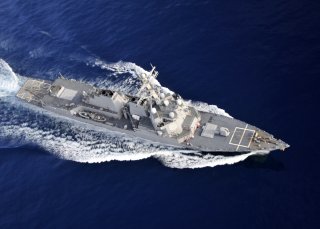 While the world takes notice of China’s visible and massive Naval expansion, the U.S. Navy has quietly been powering up its own fleet of new warships by surging along with the construction of a new generation of high-tech, heavily armed DDG 51 Flight III Destroyers.

The Navy has now formally “launched” the first of its ultra-modernized, more capable “Flight III” DDG 51 variants, the soon-to-be USS Jack H. Lucas. The ship is a small, yet crucial element of a broader service warship upgrade and expansion which seeks to help the Navy pursue and sustain maritime warfare superiority.

The U.S. Navy has as many as twenty new destroyers now in various stages of construction, an extremely significant, yet lesser-known fact of great relevance to the future of maritime war. The number of destroyers now being built by the Navy is itself quite significant. Yet of even greater significance is the fact that many of the emerging Navy Arleigh Burke-class DDG-51 destroyers are new, far more capable Flight III DDG 51 configurations.

The Flight III destroyers integrate a new Aegis Radar Baseline 10 air-and-missile defense technology intended to integrate air and missile defense with ballistic missile defense into a single operational system. The most defining element of the Flight IIIs is its new AN/SPY-6 radar, a new application that enables ship commanders to locate and discriminate multiple approaching threats at one time. Using a high-efficiency, high power-density conducting material known as Gallium Nitride, the AN/SPY-6 can amplify high-power signals at microwave frequency, Raytheon and Navy developers explain. The SPY-6 radar is explained by developers as a technology that can detect threats one-half the size and twice as far away as most existing radars. There are at times different figures or metrics regarding the exact dimensions of the system’s sensitivity. One Navy program manager once told The National Interest that SPY-6 is 35-times more powerful than previous radar.

Some of the newer technical characteristics of the SPY-6 include integrated hardware and software engineered with common interfaces. The new components, called TI 16 for “Technical Integration” enable the Aegis radar to add next-generation weapons such as electronic warfare (EW) applications or lasers as they become available.

The DDG Flight III’s are also being built with the same Rolls Royce power turbine engineered for the DDG 1000 but are designed with some special fuel-efficiency enhancements. Radar works by sending a series of electromagnetic signals or “pings” at the speed of light, which bounce off an object or threat and send back return-signal information identifying the shape, size, speed, or distance of the object encountered. Analyzing the speed, frequency, range, and variation of the return signals enables radar operators to develop a rendering or precise “picture” of what a specific threat may be. More sensitive radar such as SPY-6 will therefore enable ships to see smaller objects at greater distances and provide a higher degree of detailed information about objects, at times effectively distinguish threats from one another or from non-threatening objects.  The SPY 6 can distinguish approaching enemy anti-ship missiles close to the surface from less relevant objects and also track higher-altitude ballistic missiles on the same system. Given this scope, the SPY 6 radar systems streamline otherwise disparate fire-control technologies; the SPY 6 can cue short-range, closer-in interceptors as well as longer-range ballistic missile interceptors such as an SM-3.

There are a total of 20 DDG 51 class ships under contract at both new construction shipyards.