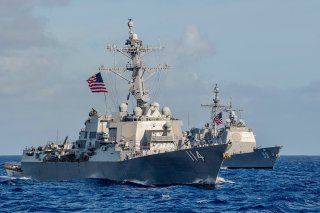 Events in Ukraine dominated the news cycle over the weekend, and much of the world focused on Russia's unprovoked invasion of its neighbor. Yet, halfway around the globe, the presence of a U.S. warship off the coast of Taiwan caught the attention of Beijing.

As with past incidents involving U.S. Navy vessels that were legally exercising freedom of navigation in neutral waters, it resulted in raising the ire of Chinese officials who called the deployment "provocative."

"The ship's transit through the Taiwan Strait demonstrates the United States' commitment to a free and open Indo-Pacific," said 7th Fleet spokesperson Lt. Nicholas Lingo via a statement to the media. "The United States military flies, sails, and operates anywhere international law allows."

The Eastern Theater Command of China's People's Liberation Army, which monitors the passage, also said in a statement that the presence of the warship was a "provocative act."

According to Taiwan's Defense Ministry, the USS Ralph Johnson—named to honor Marine Ralph H. Johnson, who was posthumously awarded the Medal of Honor for shielding two fellow Marines from a grenade in March 1968 during the Vietnam War—had sailed in a northerly direction through the strait. The ministry added that it was closely monitored and observed nothing out of the ordinary.

Throughout much of 2021, U.S. Navy ships regularly transited through the Taiwan Strait ­ nearly once per month ­but had not done so since November. Beijing has condemned the presence of any foreign warships in the waters, which sees the self-ruling island of Taiwan as a breakaway province that will be returned to mainland rule by force if necessary.

The Taiwanese government is currently in a heightened state of alert due to Russia's invasion of Ukraine, and there are concerns that China may even try to take advantage of the situation to make a move on the island. China has mounted repeated air force missions into Taiwan's air defense identification zone (ADIZ) over the past two years, which has provoked anger in Taipei.

The most recent incursion occurred on Saturday.

According to Taiwan's Defense Ministry, eight Chinese aircraft—six fighters and two anti-submarine aircraft—flew into its ADIZ, to the northeast of the Taiwan-controlled Pratas Islands at the top end of the South China Sea.

While the United States doesn't officially recognize the government in Taipei as independent, it remains the self-governing island's main partner­ and has sold it various military hardware. American law also requires that the government ensure that Taiwan can defend itself. To that end, on February 8, 2022, Washington authorized a $100 million deal with Taipei for the maintenance of the U.S.-made Patriot missile system. As a result, Beijing has responded directly by imposing sanctions against U.S. defense contractors Lockheed Martin and Raytheon Technologies.

In October 2020, the U.S. Department of State announced that it had notified Congress of plans for a $2.37 billion sale of Harpoon attack missiles to Taipei. Beijing had also announced sanctions against Raytheon, other defense contractors, and relevant American individuals.