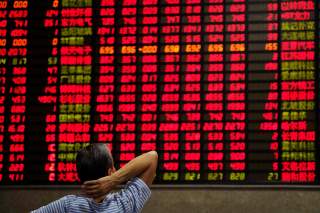 The currency cacophony of criticism currently being directed at Big Tech might be less vigorous if their dauting dominance didn’t seem so durable. What upstart could ever usurp the ultimate search engine, retailer, social media company, or smartphone maker? Of course, history strongly suggests Google, Amazon, Facebook, and Apple will eventually face tough competitive threats. Indeed, they already are — and not just from each other.

And perhaps the same perception is driving the escalating American concern about China. To some here, China it might appear to be an unstoppable supereconomy that will soon eclipse America. (What better captures the zeitgeist — still! — than that 2010 “Chinese Professor” ad.)  Even worse, China’s appears to be doing it by fiat. Beijing’s brainy central planners merely have to direct investment into a particular sector to create a powerful competitor. Or so it might seem.

The Wall Street Journal’s Greg Ip provides a needed corrective to this view. In a new column, Ip observes that “the country’s state-led growth model is running out of gas. … Absent a change in direction, China may never become rich.” Not only has growth slowed, but alternative data such as nighttime light and tax collections suggest even that reduced rate might be significantly overstated.

A slowdown would mean China is falling short of previous Asian economies that enjoyed long periods of rapid growth after opening their economies to global trade and investment. Sustained growth of even 4% might be tough going forward, Ip writes, but after “reaching levels comparable to China today, Taiwan’s per-capita income grew 7.5% for another decade, South Korea 6.3%, and Japan 4.7%.”

And while China faces some different challenges, including demographic and the limitations of its export model given its massive size and saturated global markets, there’s also this: China may be suffering from a fatally flawed growth model. Ip: “For 30 years the Communist Party opened ever more of the economy to private enterprise, trade, foreign investment, and market forces. Yet it never relinquished its commitment to socialism … The trade clash has also hurt the private firms, many foreign owned, that dominate exports while rallying nationalists to defend China’s state-centric model.”

The Soviet Union also had an economic model that for a time seemed like a threat to capitalism. Maybe the same will happen for socialism with Chinese characteristics. As Reuters recently reported, “Chinese productivity growth has gone into reverse for the first time since the Cultural Revolution tore the country apart in the 1970s, according to a new study, highlighting the failure of recent reforms to set China on a sustainable development path.” And it that really surprising? And as my AEI colleague Derek Scissors has noted, “Beijing has long abandoned the pro-market path and shows no true interest in returning to it.”

Even as some China hawks urge active US effort to undermine Chinese economic progress, particularly as it relates to technology, the communists running the country are proving to be their own worst enemy.