China Celebrates an Anniversary of a “People’s Democratic Dictatorship” 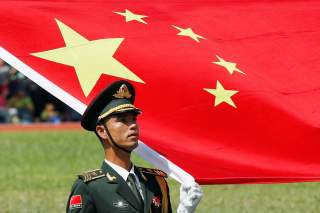 Next Tuesday the People's Republic of China is celebrating the 70th anniversary of its founding on October 1, 1949. Quite an extravaganza is planned, even as protesters in Hong Kong plan a counter-rally. China's opposition to democracy in Hong Kong and in China itself is not just the recalcitrance of cranky old men. It's part of the Chinese Communist state's founding mission.

Take the speech of Mao Zedong on July 1, 1949, as his Communist armies neared victory. The speech was titled, “On the People’s Democratic Dictatorship.” Instead of life, liberty, and the pursuit of happiness, it spoke of “the extinction of classes, state power and parties,” of “a socialist and communist society,” of the nationalization of private enterprise and the socialization of agriculture, of a “great and splendid socialist state” in Russia,and especially of “a powerful state apparatus” in the hands of a “people’s democratic dictatorship.”

Tragically, unbelievably, this vision appealed not only to many Chinese but even to Americans and Europeans, some of them prominent. But from the beginning it went terribly wrong, as really should have been predicted. Communism created desperate poverty in China. The “Great Leap Forward” led to mass starvation. The Cultural Revolution unleashed “an extended paroxysm of revolutionary madness” in which “tens of millions of innocent victims were persecuted, professionally ruined, mentally deranged, physically maimed and even killed.” Estimates of the number of unnatural deaths during Mao’s tenure range from 15 million to 80 million. This is so monstrous that we can’t really comprehend it. What inspired many American and European leftists was that Mao really seemed to believe in the communist vision. And the attempt to actually implement communism leads to disaster and death.

Fortunately, after Mao died in 1976, China changed rapidly. In far-flung parts of the country, villages and communes had already begun recreating markets and individual plots of land. Mao's old comrade Deng Xiaoping, a victim of the Cultural Revolution, had learned something from the 30 years of calamity. He began to implement policies he called “socialism with Chinese characteristics,” which looked a lot like freer markets—decollectivization and the “responsibility system” in agriculture, privatization of enterprises, international trade, liberalization of residency requirements.

The changes in China over the past generation are the greatest story in the world—more than a billion people brought from totalitarianism to a largely capitalist economic system that has eroded the continuing authoritarianism of the political system. But on its 70th birthday, the CCP still rules China with an iron fist. There is no open political opposition, and no independent judges or media. President Xi Jinping has become more authoritarian, and has concentrated more power in his own person than any ruler since Mao. Some say China is becoming "the perfect dictatorship." But there are rumblings of dissent inside the Chinese leadership. Maybe the passion and endurance of the Hong Kong protests, coming on top of the oppression of the Uighurs and the Hui, closures of liberal think tanks, tightening of economic controls, and a general increase in repression, will be a beacon that will help China return to its faltering path toward openness.