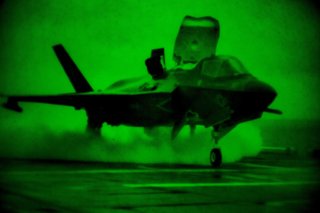 The Chinese People's Liberation Army's (PLA's) South Theatre Command announced that a U.S. warship had been "expelled" from disputed waters in the South China Sea. This is the first time that China has accused the United States of an "illegal trespass" into its territorial waters, and Beijing has said that it scrambled sea and air patrols to confront the U.S. Navy's USS Barry (DDG-52), an Arleigh Burke­-class guided-missile destroyer.

Beijing has claimed that the U.S. destroyer had "intruded without permission" near the Paracel Islands, which have been claimed by China, but also by Vietnam and Taiwan. While Washington does not recognize Beijing's territorial claim, China currently has control of the islands, which are administered by the provincial government in Hainan.

Earlier in the week, USS Barry had traversed the nearby Taiwan Strait in its second "routine transit," U.S. Navy officials have confirmed. American warships regularly "patrol" the Strait as well as the South and East China Seas to protect the freedom of navigation in the region. Beijing has called such operations an infringement on its sovereignty.

A Navy official told USNI News that Barry was not expelled as China claimed, and the destroyer, which is named after the "Father of the American Navy" Commodore John Barry, proceeded as planned without encountering any unsafe or unprofessional behavior from Chinese military aircraft or warships.

USS Barry had been active in the South China Sea operating with the guided-missile cruiser USS Bunker Hill (CG-52) and amphibious assault ship USS America (LHA-6). The latter remains the most significant operational U.S. naval asset in the region as the aircraft carrier USS Theodore Roosevelt (CVN-71) remains sidelined in Guam while its crew recovers from COVID-19.

The three U.S. warships had entered the contested waters off Malaysia earlier this month.

This incident comes as tensions between Washington and Beijing have seen a steep rise in the past month, as both sides have traded accusations regarding the global coronavirus pandemic as well as its origins.