In China Coronavirus Has Created a Speculative Bubble for Thermometer Guns 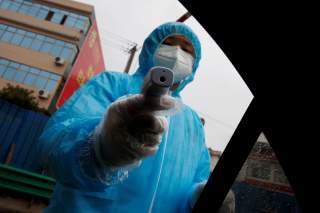 Every day around 2 pm, one of the staff at the hotel where I am staying will come by and knock on the door and pull out a thermometer gun and aim it at my forehead. He’ll come by again at 8 pm. If the temperature on the first shot is too low, he’ll shoot it again at my wrist.

These thermometer guns are ubiquitous in China. Whenever anyone enters almost any store, office building, residential community, public park, station, or another public place, they will have to get their temperature checked. But thermometer guns are “notoriously not accurate and reliable.”

They are also incredibly expensive. If you go looking for them online.

In just a few days, the advertised price for many thermometer guns increased from around 200 Chinese yuan (US$28) to over 500 yuan ($71). At the beginning of the year, they were sold for 100 yuan.

As one article shared on WeChat said, “Thermometer guns are the new face masks.” It’s the latest market for online scammers and hoarders to exploit.

As Chinese people are returning to work, businesses need contactless thermometers to check the temperatures of employees and customers. But many factories are only now just opening up, and production needs to catch up. A recently-reopened factory in southern Guangdong province has technicians working until midnight or later. Factories in Kenya have also been working overtime to meet export demand.

But the internet police in Xinyu, a city of just over 1 million in Jiangxi province, has warned of many types of scams proliferating on China’s chat apps and social media websites from people purporting to sell thermometers.

There are those who take upfront payments and then never deliver. Perhaps they never even had the thermometers in stock in the first place. There are those who deliver fake or low-quality thermometers at inflated prices. Finally, even if the seller somehow did get their hands on 50,000 medical-standard thermometers and gouged the price by double or triple, that itself would be unlawful profiteering.

Retailers and vendors need a license to sell such medical products to the public. The people advertising thermometers for 500 yuan on WeChat and forums are, for the most part, not licensed sellers or producers. They might be anonymous newly-registered forum members with a cat as their avatar who claim, “I connect with three manufacturers.”

While there are some people purchasing for large companies or agencies who might need to buy in bulk, the vast majority of large-scale transactions of thermometers are between middlemen. One person will procure a few thousand thermometers for 500, say, then sell 3,000 for 520 and make a profit more than ten times the average monthly salary in one deal.

In fact, the vendor advertising 3,000 thermometers might not even have that many in stock. Then they have to rush to find thermometers from another source at an inflated price. A good deal of the market is a Ponzi scheme. Scammers ripping off scammers.

Relatively few end users are actually purchasing thermometers online at such inflated prices. Legitimate manufacturers are selling through licensed vendors and taking preorders. One hotel manager from Hunan said she had applied through official channels to purchase thermometers for 249 yuan a piece.

Once factories get back up and operating at full capacity, demand will shortly be met. And, unlike with face masks, companies and work units only need a handful of thermometers that can be reused day after day throughout the entire epidemic. The market is much more limited than that of face masks, which are meant to be used only once. One black market dealer quoted in Bai’s article expected it to die down by early March.

There’s a saying in Chinese comparing speculators to cloves of garlic. “Don’t be the last clove of garlic,” the one holding onto 50,000 thermometers you paid 30 million for in March, or you’ll be chopped up.